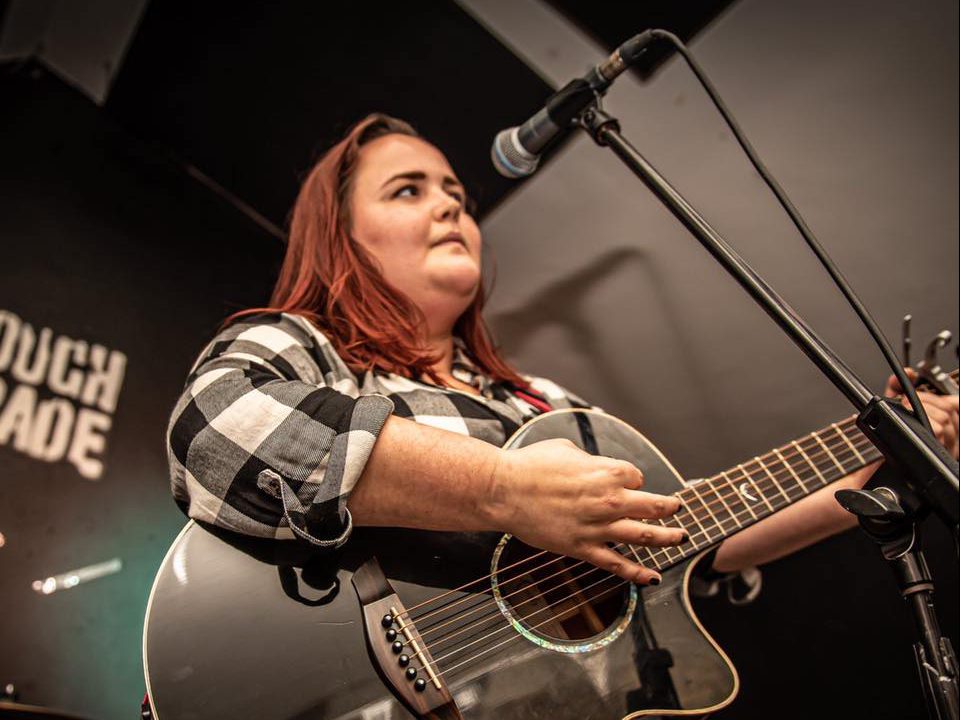 Hello Chloe, how the hell are you?

For anyone not familiar with your music, how would you describe what you do?

I suppose to sum it up, I would define it as passionate, punk-influenced folk. I write a lot about mental health and my experiences, and my live sets usually flick between being loud and energetic to quiet and sorrowful. And usually there’s one or two disasters, but that’s all part of the fun.

You’ve recently announced the release of your debut EP. It’s been a long time coming. How excited are you to finally put something out?

Honestly, I am just beside myself with excitement. It feels like it’s been a long time coming as you say, and I really hope it’s well-received. I am absolutely terrified, and I’m feeling very anxious about it all, but I think on the whole it’s a good type of fear- like stage fright. I am so happy with how it sounds. It was recorded, mixed, produced and mastered by the incredibly talented Steve Millar (of Arms & Hearts fame), and the beautiful artwork was done by the wonderfully brilliant Dan Allen (of Ducking Punches fame). I feel very very lucky to have been able to create something that I’m so happy with, and I cannot wait to share it.

You’ve been playing for a while now, so how did you decide which tracks would go on the EP?

The EP feels to me like a snapshot of the spectrum of things that I do. One song about romantic confusion, two songs about mental health, and one song about things getting better when everything feels horrid. I feel that it really sums up who I am as an artist, which is what I really wanted in this debut release.

There’s so much amazing talent in the UK right now, and you get to share the stage with so many people making great music. Who should we be checking out?

It’s such a difficult question to answer, because as you rightly say- there’s so much talent and I’m so lucky to be able to make music with so many amazing people! At the minute I’m absolutely obsessed with my friend Lana Wild’s debut EP ‘Bare.’ Anyone who’s seen her live before knows that she is absolutely spellbinding and she’s so talented it’s ridiculous. So I cannot recommend her enough- the EP is stunning and I’m so proud of what she’s doing. So yeah, check that EP out and go and catch her on her UK tour in summer! I also must mention Chloe Hawes- one of my best mates in the world and one of the most phenomenal musicians I’ve ever known. If you’ve not heard her play yet, you’re missing out- she is astounding. We went on tour together a couple of years ago and every night was such a joy to watch her have an audience captivated every night. Catch her at your earliest opportunity. This is probably the nicest I’ve ever been about Chloe without calling her a swearword, so I hope she appreciates it.

Speaking of there being so much amazing talent in the UK, there are loads of awesome folk coming together for our big do in October. You’re playing for the second year running, what are you expecting from that show?

One for The Road 2019 was honestly one of my highlights of 2019. Not only is the lineup amazing from a musical point of view, but it’s SUCH a mates fest. The festival was so fun, I felt safe and relaxed and happy and empowered, and I just felt like it was the perfect snapshot of why this scene is so brilliant. In terms of what I’m expecting this year, I’m expecting more rowdy singalongs, more fun, and more of that delightful welsh whiskey I drank loads of last year. Myself and a few friends got an airbnb in York for the festival and I think that’s the plan this year too, which is the best way to do this sort of festival! The next morning we all died a monumental death in Spoons- truly the perfect way to end a perfect weekend. So to sum up; I’m hoping for more of the same!

Women are often under-represented on gig and festival line-ups. The DIY punk scene seems to be better than most for equality, but there’s still a lot of work to do. What challenges have you faced as a female musician over the years, and would you say that things are improving?

This is a tough thing to talk about. There’s a startling lack of representation, as you say. What’s frustrating is that we are out here making music, and if you look at lineups such as Manchester Punk Festival, it’s living proof that you can make a stellar lineup in this scene that’s gender diverse.

I face challenges in this all the time; everything from being called sweetheart whilst I’m trying to soundcheck to being overlooked for gigs because i’m a woman. I was once publically tweeted about and it was insinuated heavily that I was only being booked for a show because I’m a woman, and I was only being booked because the promoter felt that they should have a non-man on the lineup. That one really stung because I work just as hard as the men in this scene, and to imply that booking me is virtue signalling is an insult to the work I put in.

I am just one person, and only have my own experiences to relay, but frankly it’s exhausting. It’s exhausting having to prove myself over and over again, it’s exhausting seeing the all-male lineups when we have such a wealth of phenomenal trans, non-binary, and women musicians. It strikes me as lazy and it’s tedious to see. I’m also told that I should be diplomatic when talking about this stuff but that’s also exhausting. I’m angry about it; I’m angry that we even need to have this conversation in 2020; and I feel like I’ve got a right to be angry at this point. So why should I be grateful for people making the slightest amount of, frankly insufficient, effort?

So whilst I would say that things are getting better, we are still absolutely leagues behind where we need to be.

Hollywood calls, they’re making Chloe Glover: The Movie. Who stars as you?

Hahaha, this question was a difficult one! I honestly have no idea. I think Emma Stone is pretty bloody cool, so I guess that would be neat.

Just that I’m so excited for the release of my debut EP and thank you for asking me some lovely questions about it! ‘Dark Matter’ will be available for download and streaming on all the usual sites including iTunes, Spotify etc, on 20 March 2020. I’m doing a launch show for it at Gullivers in Manchester on 20 March 2020 and tickets are flying out so if you want to come along, then get on it! See you at the bar, and mine’s a whiskey and diet coke!