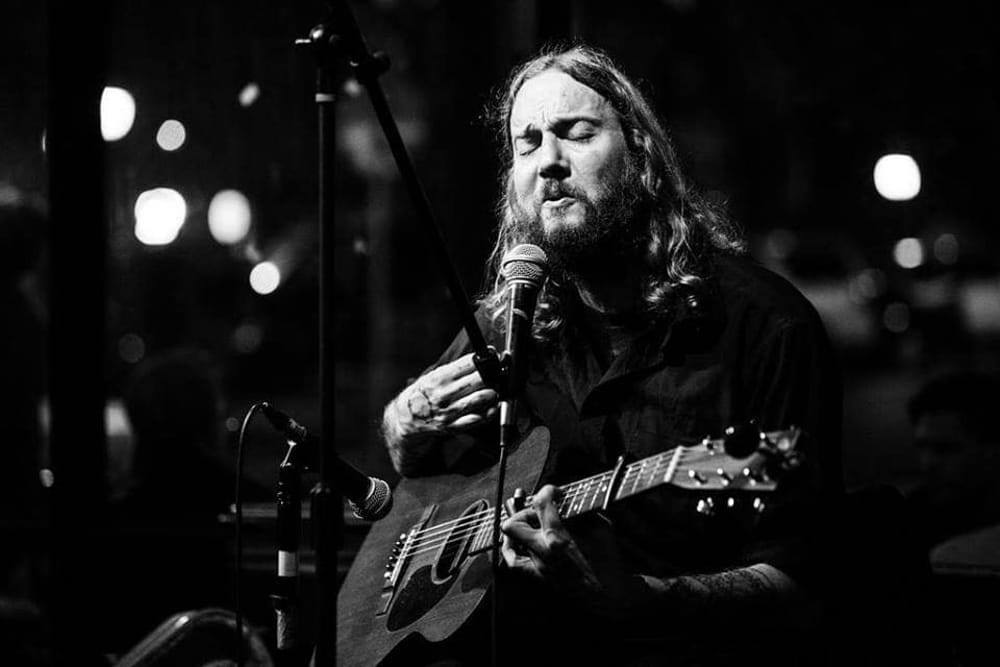 We caught up with our buddy Tim Holehouse as he was on his way to Canada to hook up with tour mate Greg Rekus ahead of a mammoth tour across Canada, the US and Europe. Here’s what he had to say:

Hey Tim, how are you doing?

Not bad! I’m typing this on a bus to France where I change to fly to Canada. Cramped, but not bad!

You’re heading out on a huge tour with Greg Rekus soon. You and Greg have toured extensively together, despite having quite different sounds. Why do you think you and Greg work so well together?

Well I guess the first thing is we get on really well as people. That’s very important. When doing that long a tour together you’ve kinda gotta right? We also like each other’s music a hella lot. Musically I’m not sure it’s super different. Yeah, Greg is way more punk than a lot of my material, but we’ve both got gruff old voices and a certain energy. I guess my stuff could be described more as punk blues and he’s more punk rock. But yeah, it has same sorta energy and urgency and I’ve started to move away from the blues based sound a bit of late. The big difference in our stage show is I sit down stamp my foot and Greg stamps on a bit of wood and jumps up and down. Also our new albums are kinda different – he has sax on his mine is a country ballad album. Ok, so maybe we are pretty different ha ha! For me he is one of my favourite live acts also one of my favourite humans too.

Are there any shows in particular that you’re looking forward to?

All of them! Haha! I gotta say I do love the Snickleway where we are playing for you. York is always a pleasure. In fact my holiday last year was in York. I love playing Canada, although the distances can be a beast. And the first US show in Minot will be fun. I played there in 2011 and it was one of the best shows of the whole tour. Generally most shows are a lot of fun when you are with Greg.

Your most recent album, Come, has been very well received with some excellent reviews. How happy are you with the reaction to it?

I’m super proud of this album it’s very different to my usual stuff and I put so much into it. When first came out didn’t seem to get much reaction, I was kinda a bit self deafest about it. I put so much in and seemed to come out to a muted response. Maybe timing was off though as certainly in UK there was election madness and then Christmas. But since it’s been gaining momentum and really pleased come out with some lovely reviews. So yeah, proud of how well been received now. I mean I know I’m never gonna be super famous I don’t write straight up enough stuff… I’ll never be The next Frank Turner. That’s not a slight on him by the way, I’m very impressed with how well he’s done and good for him he’s like, you know, Bruce Springsteen and I’m Captain Beefheart maybe? I guess as Roo from Bangers said to me once – you are too weird to be famous and everybody is surprised I’m not dead! So I’ll keep on being weird and not dead for as long as I can.

You spend a lot of time on the road playing alongside hundreds of great acts that go under the radar every year. Who should we be checking out that we might not know already?

Such a heavy touring schedule comes with a lot of pressure. What tips do you have for surviving on the road and maintaining a relatively healthy lifestyle, both physically and mentally?

Yeah, every year I say I’m gonna do less. Problem is I’m one those people says yes to lots of things. Henry Rollins taught me that. I guess averaging 200-300 shows at a basic DIY level is kinda hard going. My back is destroyed, my knees are fucked, I’m bi-polar as hell, but I love what I do and that’s why I do it. Basically my top tips I guess, and I’m writing more about this in my book ‘Quiet’, is take care of yourself and know your own limits both physically and mentally. You don’t have to get hammered drunk every night. Try to eat a healthy warm meal once in a while and not just junk food. Sleep as much as you can and be nice to people!

You’ve also being very prolific in releasing music. What else have you got in the pipeline?

Yeah it’s funny what I release is the tip of the iceberg. You’d be surprised at how many ideas and songs get stored away and never used. It’s not all net sadly. I don’t think anyone has figured out that my album names are all one word and I’m going through the alphabet randomly. But I demoed an entire album last year one song a month for year. I hope to record that with Tim Van Doorne of Night Dog studios who did Billy Liar’s album. It’s kinda ended up being very punk and not very acoustic at all. I have an album I’m slowly planning with some amazing guests that’s gonna be called ‘No’ and it’s very fucking weird. I’m trying to finish the first draft of my book ‘Quiet’ which will have a CD with it and possibly an audio book and podcasts. I’m nearly done with an album with a whole bunch guest of trip hop electronic industrial stuff for two mental health charities. Finally I’ve been writing with my German friends the Tourette Boys who I play with now and then. We’re writing a new album as a collaboration for the first time instead of me just telling everybody what to do. Ha ha! So yeah I do like to keep busy it’s true.

You’re playing our big do in October. What are you expecting from that weekend?

Drug money and fame! Haha! No, a fun lovely time with friends new and old, to hear some great music and hang with my buddies (and label mates on Aaahh!!! Real records) Ben Sydes and Jake Martin.

Hollywood calls, they’re making Tim Holehouse: The Movie. Who stars as you?

I kinda wanna say Bill Murray, but I guess he kinda is way older than me and looks nothing like me. Jeff Bridges I guess? Although you I could probably play myself, I reckon I could act. Haha!