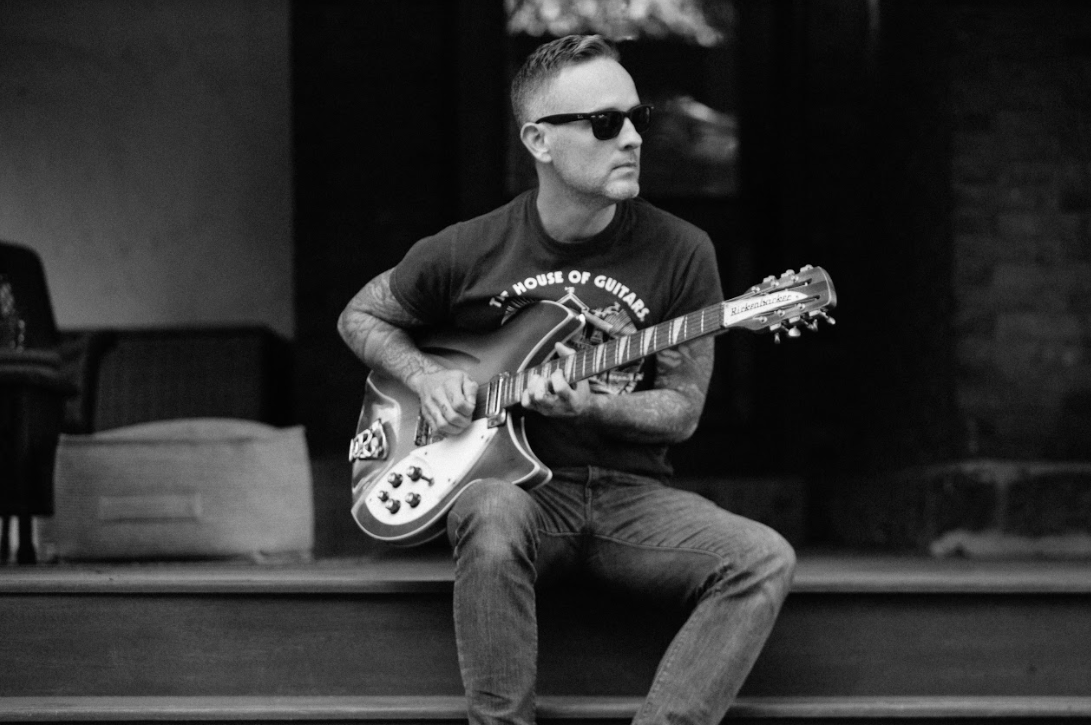 We recently sat down for a chat with Dave Hause to find out about touring with Gogol Bordello, what it’s like playing his entire back catalogue on tour and as always, who get get the lead role in a movie about his life…

I’m doing very well! How about yourself?

Great, thanks! So you’re on the road at the minute opening for Gogol Bordello, how’s that going?

It’s going well. We’ve got five shows, one in the Netherlands and then four here in the UK. It’s been cool. It’s definitely a learning experience to open for a band doing what they do, which is a really unique thing. Each night we’ve worked really hard and dug in and kept with the crowd. By the end it’s felt like a victory, like we’ve won them over, which is gratifying.

Your latest album, Bury me In Philly, has been out for a few months now. Are you happy with how it’s been received?

I was just happy to get the album out and get to work. There was a huge break, a couple of years, between the last record and this one. We had a great time making the record and recording in, and people seem to like it. All the press that we did early was really positive. That’s all a good feeling and it’s good to have that bubbling excitement when a record comes out, but to some degree as a working musician it’s nice to get into the pattern of playing shows and growing as a band. That’s the focus currently. It’s nice when people are still discovering the record a couple of months later, because to me it’s already in the past now. I’m more worried with what we’re doing right now, but it’s nice that people are still discovering it and that people like it. It’s nice to see people singing along.

I was at your last show in Leeds up at The Brudenell Social Club. I’ve seen you play a few times over the years and my thoughts watching that show were that you’ve found exactly what you want to be doing. It could be just the excitement to play new songs for the first time, but it seemed that you felt more comfortable and at home playing these songs with The Mermaid than ever before. Is that a fair observation?

I think so. Putting the Mermaid together was a pretty scary endevour because the overheads of operating went up by multiple hundreds of percents, but ultimately I’ve always wanted to play with a band and be part of a band. On this long circuitous journey of making music I’ve finally found that with this group of people and that Brudenell show was on the first real tour we did together. The band keeps growing and gels more with each tour, with each show, and it feels like the most talented group of people in one petri dish of a band that I’ve ever been in, which is really exciting. We’ve only done six months of work, but to measure where we were then musically and where we are now is pretty rad. It’s exciting and fun. It is exactly what I want to be doing. We’re marrying a lot of different styles and ideas that I’ve been working through my whole career. Whether it’s the energy of punk rock or the singer-songwriter commitment to craft, the acoustic elements, the rock elements, it’s all in the stew now.

It must have been quite stressful getting ready for that show and tour generally. I believe that was day one and a band had to drop out of the rest of the tour. I mean, it worked out well for us here in Leeds because we got Helen Chambers added to the bill, who always makes a line-up better. How do you deal with things like that happening?

It’s always good to have Helen play. It was a little bit stressful but on the bright side we ended up with the whole bus to ourselves, that was a silver lining. Helen played that show, and Kayleigh [Goldsworthy] played a couple of shows too. I mean, it was all fine. I learned a couple of things on that tour and one of the things was that micro-managing can really drive you crazy so there were quite a lot of things I just let go of on that tour and by the end I was just having a good time. I was like “Oh hey, they’re going home but I can’t really control that.” I just wanted Drew’s finger to be OK, and it is now, that’s a positive!

On that tour you played every song from all three albums…

We did, yeah. That was the goal for the tour that included the UK, Germany and Austria, but the intense support in Germany meant we pushed that goal and did it in just the German shows. It was really nice for the German fans and it extended out to the rest of the tour. I think the rest of the band, at points, were like “Man, what is going on? Why do we have to do this?” but ultimately everyone got better for it by throwing everyone in at the deep end. I was exercising my inner James Brown as a band leader, really cracking the whip, but now it’s allowed us a certain freedom with the setlist for when people have requests, or if you read the room differently that night. You have the power to just say “We’ll rehearse this one in soundcheck” and have everyone familiar with it, it’s great. We’ve also started to delve in to The Loved Ones catalogue as a potential spring of songs choose from too. I’m glad we did that and I think we’ll continue to do that. When you look at bands like Pearl Jam or Bad Religion, at different stages of their career they’ve always been fearless with their setlist and they switch it up often. It doesn’t become about one song, it becomes about the experience and the journey you take the crowd on with your set. That’s the kind of band we’re aspiring to be.

So would you say that the other bands on the line-up influence the way the setlist comes together? For example tonight at a Gogol Bordello show, Pray For Tuscon might not be the right choice of song for this audience…

I guess in a way they do. There’s always a line. You’re there to entertain the crowd, so you don’t want to swim against the stream in the Bob Dylan way, but you also want to challenge the people that are there for you. Supporting a band is different from a headline show. Tonight we have half an hour, so we’re just making a commercial for what we do, so you have to distill down what you do into that thirty minutes when you take a support tour, and scoop up as many interested fans from the headliner that you can fine. In a round about way I guess the headliner does steer it a little, but I don’t really think about it that way. You try different things that you think might work and adjust it if it doesn’t.

You’ve said in the past that it was on the Revival Tour with Chuck Ragan, Dan Andriano and Brian Fallon that you as a solo artist really started to become a full time ambition after Chuck & Brian were very supportive of what you were doing. Was there a point a little further down the line, a specific show or song that you wrote, that really cemented in your mind that what those guys were telling you was right?

I think that maybe the following Spring? No, it was 2013 and I headlined a stage at Groezrock. That was a really monumental show. I wasn’t sure if it was the right slot for me. I thought it was going to be empty but the tent was full and everyone was singing. That was the confirmation that making the decision to stay in that lane was the right thing. That was a really memorable experience. That was a special tour, The Revival Tour, the first time I came over here and was figuring out what I was doing as a solo guy. Now that we’ve got the band together and we’re touring in that capacity I have embraced the idea that this is a long journey and have abandoned the idea that there’s a ‘make it’ experience. It’s an accumulation of what you’re doing, a small conversation that you’re having with an audience that is hopefully expanding, and over time that can provide you with a life where you play music and it supports you. You can be brave and take risks, and sometimes fail, and it’s about that long journey to me now rather than wondering ‘Should I be a solo guy? Should I be in The Loved Ones? Should I be in The Falcon?’ I’ve just learned that it’s about all of that stuff that lets you live a life of creativity and for all that I’m extremely thankful.

A silly thing to end on then. Hollywood calls, they’re making Dave Hause: The Movie. You’re in charge of casting. Who get’s the lead role?

My brother Tim. You want a famous actor? OK, Johnny Depp. Let’s give it to Johnny. He seems to need a role with less whimsy and more grit.