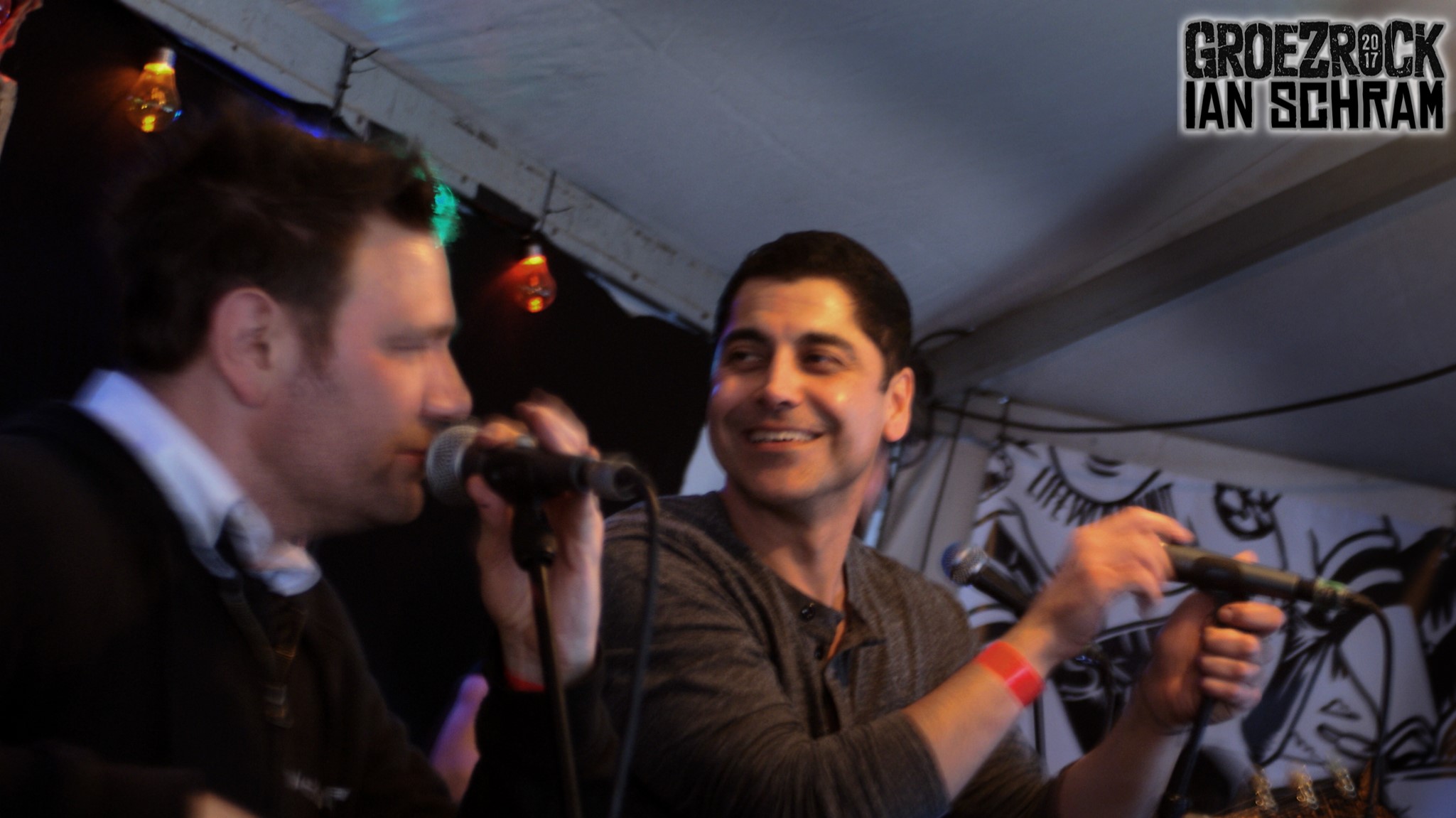 Sunday at Groezrock this year, for my personal tastes, was the weaker day of the two in terms of bands that I was really excited to see. That didn’t mean I wasn’t looking forward to it though, I’ve found some of my favourite bands while checking out some unfamiliar names at festivals in the past.

F.O.D kicked things off on the Monster Energy Stage, their melodic punk rock was a great way to ease into the day and shake off any lasting hangovers from the night before. Their sound covered a wide range of the punk spectrum, so it’s not surprising that they managed to get people out of bed for the start of the day and draw a big crowd.

Arcane Roots were on over on the Back to Basics Stage. They’re a technically sound, anthemic rock band. There’s not really anything bad to say about them or their performance, but they just weren’t what I was looking for at a festival like Groezrock.

The sign outside the American Socks Acoustic Sessions tent suggested that Tim Vantol would be playing at around 1:15, so to make sure I didn’t miss that again, I headed there in plenty of time to get to the front. What we actually got though, was an unannounced surprise from Canadian folk singer Joe Vickers, who is currently on tour with Mobina Galore, who were scheduled to play later on the Watch Out Stage. Vickers told us stories such as what it’s like hitchhiking with a moustache and sang songs about travelling. He’s exactly what I want in a folk singer, and I’ll certainly be checking more of him out in the future. (Refer back to paragraph one of this feature and consider today a success already).

Thanks to Joe Vickers, I was very much in the mood for some folk, so it’s a good job that Skinny Lister were on the Monster Energy Stage. To get straight to the point, their live set is phenomenal. It’s got everything you want in a festival band – energy, humour, singalongs, dancing, everything. This was somehow the first time I’d seen Skinny Lister, but it certainly won’t be the last.

After Skinny Lister’s set it was back to the American Socks tent to finally see Tim Vantol, who certainly didn’t disappoint. Having been reliably informed that his full band set yesterday was the highlight of the day, I was definitely looking forward to this. Tim played a short set of new and old songs, mainly crowd favourites which had the packed tent singing every word back at him. The most unexpected part of the set – as you’d expect it to be during a solo acoustic performance in a merch tent – was the presence of crowd surfers, who appeared at Tim’s request.

Following an excellent solo set from Tim Vantol, it was over to the Monster Energy Stage for the band that I’d been looking forward to the most, Zebrahead. It’s always a party (party) whenever this band takes to the stage, and Sunday at Groezrock was no different. From their first song, Save Your Breath, right through the last, Anthem, it was just so much fun. Sure, a lot of the show is tried and tested – like suggesting that one of the security guards has asked for loads of crowd surfers to help celebrate his birthday, and their ‘Drink Drink’ song, but who cares? It’s fun. A Zebrahead show is all about having a good time, and this was a classic example of that.

Choking Victim were next. Their ramshakle ska-punk show is, quite simply, punk as fuck. It’s a little rough around the edges, but it’s good fun nonetheless. A particular highlight was seeing frontman Stza take on the main sponsor of the festival, Monster Energy, telling us all how fucking stupid it was. It’s a punk rock festival afterall, stick it to the man! I’ve always been more of a Red Bull guy anyway…

I managed to catch ten minutes of Counterfeit after that. They’re a band on the rise at the minute and with their high energy show and sound that mixes rock, punk and hardcore, it’s clear to see why.

It wasn’t long before I found myself squeezed back into the American Socks Tent for another acoustic session, this time by Zebrahead. Their set was delightfully shambolic, but a lot of fun. They’re great songs, so every now and again it’s nice to hear the likes of Anthem, Playmate of the Year and Hell Yeah played a little differently.

Jeff Rosenstock was up next on the Watch Out Stage. Sporting the brightest green vest I’ve ever seen, Rosenstock draws the crowd in with his infectious charm and personality. Picking up where Zebrahead left off earlier, he’s here to bring the party. There were stage divers throughout the set and during the final song, there was a complete stage invasion which also saw Rosenstock abandon the stage to party where the crowd used to be.

Simply put, Pennywise are a punk rock band of legendary status. The Monster Energy Stage was packed from front to back for them as they belted out countless fan favourites, including Fuck Authority, Same Old Story and closer Bro Hymn. Almost 30 years into their career and they’re showing no signs of slowing down.

Harrogate’s Blood Youth were the final band of the weekend to take to the Watch Out Stage. There’s quite a buzz around this band right now, coming on the back of the release of their debut album, so it’s no surprise to see quite a big audience gathered around the only outdoor stage of the festival. Their set of melodic hardcore was played with precision and perfection. They’re a very polished live band with a great future ahead of them, based on this showing.

Parkway Drive brought Groezrock 2017 to a close on the Monster Energy Stage. Now, this band don’t fall anywhere near my taste, and they’re not a band I’d sit and listen to at home. In the live arena though, it’s near impossible to find fault with them. They’re passionate, they have a lot of energy and they clearly put a lot of time and effort into their live show. There were pyrotechnics galore, and towards the end of the set, the massive circular frame that the drumkit was mounted on span around during a drum solo. This is rock n roll for the new generation, and Parkway Drive are worthy headliners of this great festival.