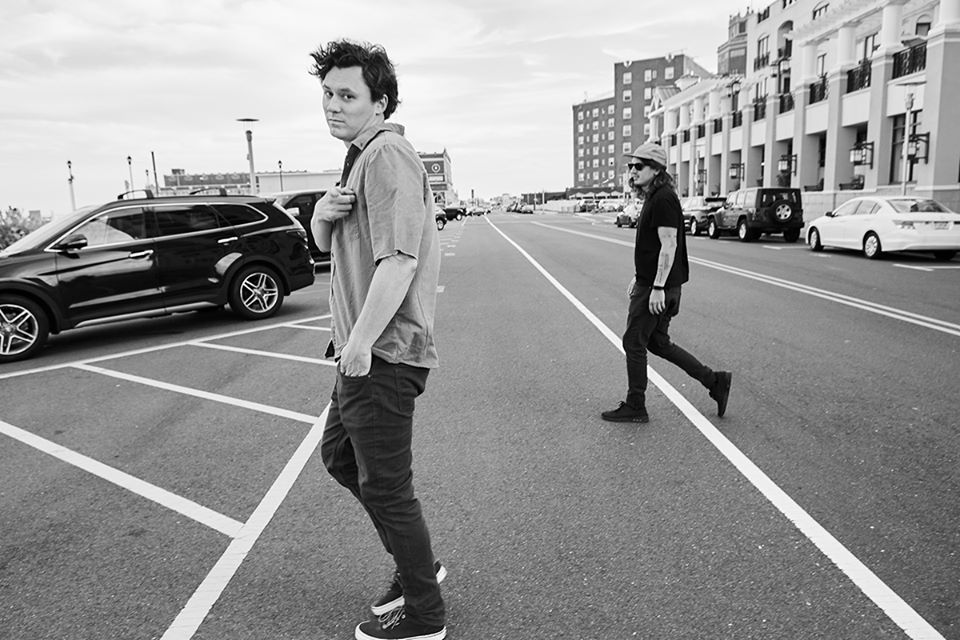 Until very recently, The Front Bottoms have been a band that have passed me by. Initially, it was seeing The Smith Street Band on the line-up that grabbed my attention and now, after seeing them play, I feel like I’ve been missing out.

This show was day one of The Front Bottoms, The Smith Street Band and Brick + Mortar’s UK and European tour and it’s highly likely that they won’t play at another venue quite like this again for the rest of the tour. The Albert Hall in Manchester is a stunning building with a balcony that allows the audience to be right around the stage. Unfortunately the sound on the balcony isn’t great due to the size and shape of the room, but we soon figured that out and found a good spot on the ground a couple of songs into Brick + Mortar’s set.

Now, where to start with Brick + Mortar? Personally, I don’t get it. Bass, drums and samples with an overall sound not too dissimilar to Twenty One Pilots, perhaps not quite as polished, but their stage show is just something else. They rely quite heavily on visual props, from a huge balloon to hold up, big inflatable hands to wave around and a shirtless guy wearing nipple tassels while dancing, most of which were clumsily taken in and out of a suitcase throughout the set. I spent the whole set confused and not having a nice time. I then went to the bar and paid £6 for a pint of lager, which didn’t help.

Fortunately, The Smith Street Band were on next, and they’re one of the best live bands around at the minute. I’ve followed this band for quite some time, and having mostly seen them play headline shows to relatively small audiences compared to this one, I was intrigued to see how they’d go down. Having toured extensively with The Front Bottoms around the world, I figured that the majority of the audience would also be fans of The Smith Street Band, but there didn’t seem to be as many as I first thought. That’s not to say they didn’t go down well, quite the opposite, but there were noticeable pockets of the audience that were big fans, singing along, fists in the air. From the opening chords of Death To The Lads right through to the end of Throw Me In The River, The Smith Street Band played an absolute blinder and if there weren’t as many fans there as I was expecting at the start of their set, there certainly was by the end. Charismatic and endearing frontman Wil Wagner’s engaging presence between songs, which included positive reinforcement for those suffering with mental health issues and a mention of his favourite venue in Manchester all contributed to one of the best sets I’ve seen in a long time.

Finally, the headline band. As I mentioned earlier, somehow The Front Bottoms are a band that had passed me by for quite some time. They’re one of a number of bands that have been around in the scene that I’m a fan of for years, but I’ve never quite gotten around to giving them the time they deserve. In the weeks running up to this show I’ve been listening to a few bits, and I’ve really enjoyed what I’ve heard. Still, coming into the show only knowing a handful of songs, I didn’t know completely what to expect.

Speaking with frontman Brian before the show, he told us that they had quite a big show planned – big screens, a banner drop and extra musicians onstage with them. I’ve found visuals on big screens onstage can sometimes be a little distracting if there’s too much going on, and the crowd’s attention can often be drawn away from the band they’re there to see. Fortunately, The Front Bottoms had got the balance right, and given how entertaining frontman Brian Sella is, there was little chance that people would be looking elsewhere.

Throughout their 21 song setlist the highlights for me were Twin Size Mattress and Peace Sign, but with a full room singing along at the tops of their voices from start to finish, it’s hard to tell if that was a mutual feeling during the crowd. It’s rare to see a crown that enthused from start to finish with little to no sign of letting up.

This is the band’s biggest UK tour to date, and the important part of that are the words ‘to date’. If they keep playing like this then who knows just how big they’ll end up. One thing is for sure, they’ve already gained a new fan here, as I’ll certainly be making more of an effort to listen to their back catalogue on the back of this show.