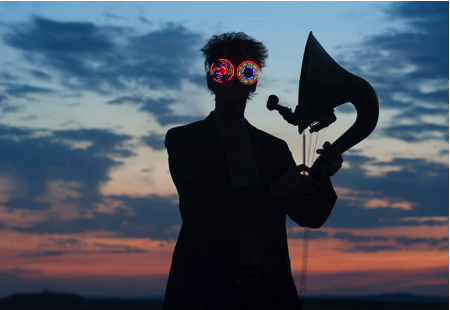 Now then. Dan here. One half of the rattling rocking York-based duo Snakerattlers. I went out to a gig the other night. Like I do most nights. Craig saw on Facebook that I was going and asked me to review it. Like a real writer and everything. So I said yes.

The gig was at The Fulford Arms on the 2nd of February. On the bill was Thomas Truax, Jackson D and We Are Hannah.

I’d seen Jackson D and We Are Hannah at other shows, but Thomas Truax was someone I had not managed to catch live before. I had heard many rumours about the man, and his marvelous machines of musical mayhem. I wasn’t really sure what to expect, but I was interested to find out how he does music. I honestly couldn’t believe what unfolded.

Up first we had We Are Hannah. It’s a three piece with an acoustic guitar, ukelele and double bass. The three players also combine their vocals to fantastic effect, which creates three part harmonies. Their music is soft, soothing and haunting all at the same time. I was getting a lot of Enya from their sound, but this is mixed with a much more up-to-date edge. There are definitely traditional folk songwriting elements within their work though. Many skills were on display when the three of them were combined to make this band.

Second on the lineup was Jackson D. I actually booked these guys for one of my Behind The White Door shows last year, and they have since become a firm favourite at The Fulford Arms. They’ve been cleaning up in the booking gigs department, and rightly so. They are comprised of slick percussionist (not drummer) Zach, the highly skilled Sarah on bass/backing vocals, and the unflinching, charismatic hypnosis of Jackson on the guitar and lead vocals. When this man starts singing, you cannot look away from him. It’s almost like he is channeling some kind of spirit in a musical seance. Chilling stuff. But really really good. If the paintings of Jack Vettriano could make music whilst you looked at them, Jackson D would provide that music.

Finally, we come to the main event. Thomas Truax. His set was quite simply the best thing I’ve ever seen in The Fulford Arms. And I go there A LOT. It’s a bit difficult to put into words what this man does. But I will try.

He emerges wearing metallic cog glasses that totally obscure his eyes. He has three musical horns attached to his mouth and a resonator guitar. He begins to play the guitar and blow down the horns. Everyone in the room just stops their conversations and immediately pays attention. The experience had begun.

As the set progresses, we are treated to sounds from The Mother Superior, which is a drum machine like no other. What looks like bicycle wheels spin round on a motor, and hit various different drums and other hollow parts, with apparently colour coded arms to create different drum patterns for each song. Madness. But excellent. This coupled with the resonator guitar and various effects and loop pedals, makes for some very interesting listening.

During the track “Full Moon Over Wowtown” Thomas holds a note on the unplugged resonator, and walks outside. And we all just followed him. He walks down to the bottom of the beer garden, whilst still holding the note, and waits for the moon to come out from behind the clouds. He then does another verse and chorus of the song, whilst we all stand there in the car park and watch. It was like a human version of the Pied Piper of Hamlin. Thomas then set off to the pub’s beach-scene mural, which has a big moon painted on it, and he did another bit of the song there. He then went inside to the ladies toilets, and again everyone followed him in. He did another bit of the song, before returning to the stage to a hearty round of applause. I have never experienced anything like that, and I’m really glad I went outside to see what happened.

The hornicator makes some appearances, most notably for the song “Beehive Heart”. The primary parts of this song were made by looping sounds created by a spinning pair of light-up glasses. Thomas Truax thinks about music in a totally different way to anyone I’ve ever seen before.

In between the technical wizardry songs, we get to experience a more softer side to Thomas’ personality. Some of the tracks that are played just on the resonator guitar were very delicate and genuinely felt like we were all witnessing something very special. A song about butterflies (I can’t recall the name of it) was whimsical but also had an underlying message. Or at least I think it did.

I got the impression from seeing Thomas Truax live, that he is a man of two halves and many talents. On one side, he is the Willy Wonka of music. On the other side he is a thoughtful nature lover, who doesn’t always mean exactly what he says. He’s a like a puzzle that you just can’t put down.