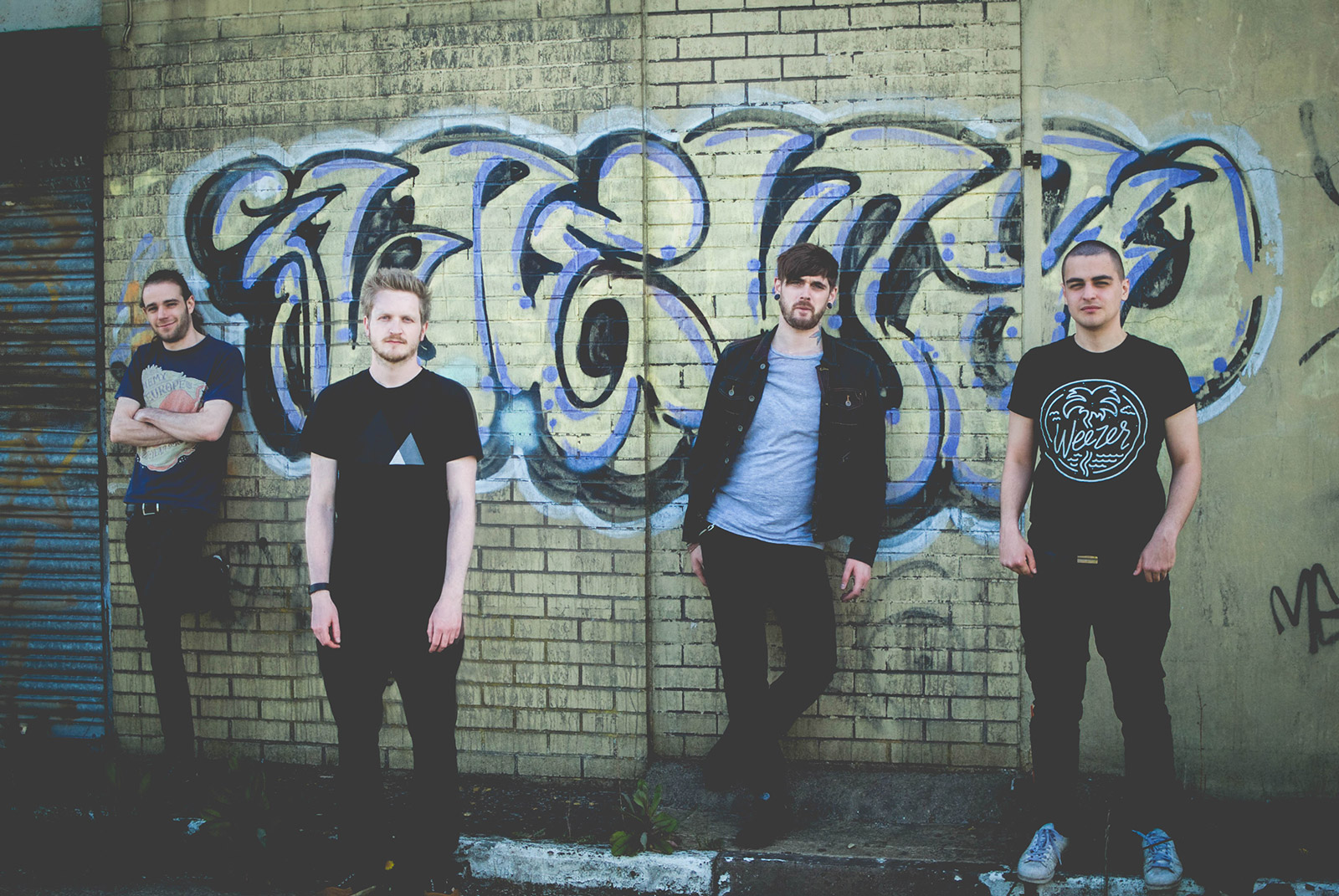 We sat down with Martin & Elliot from Feed Them To The Forest before their headline show at The Fulford Arms in January to talk about being from York, going to shows and annihilating zombies with interesting weapons…

Hey guys! Let’s start with you introducing yourselves and telling us what you do in the band…

Elliot: My name is Elliot and I do vocals in Feed Them To The Forest

Martin: I’m Martin and I do backing vocals, I guess, and play guitar.

Elliot: It’s a bit more than that though isn’t it, darling

Martin: We’re the primary songwriters of the band as well

For anyone that hasn’t heard you guys yet, what is the Feed Them To The Forest sound made up of?

M: A lot of back and forth vocals.

E: At it’s core it’s big singalong choruses… It’s tricky because if you call it pop-punk a lot of people expect board shorts and songs about pizza and shit, and if you say that you play emo people think you’re screaming and you’ve got massive hair

M: I call it a big melodic rock band when people ask me

M: It’s what happens to pop-punkers when they get a bit older.

What’s your inspiration when writing lyrics and putting together songs?

E: We both write lyrics. For me it’s just stuff. Life, being bored, fed up. Things that annoy me. Ail me. Anything really.

M: Elliot tends to write lyrics like it’s a poem. He can write things with no music and just have a thematic idea, whereas when I do stuff it’s a lot more jammed. I start by thinking “What would sound appropriate over this tune?”

E: Most of the time I’ve got lyrics before I’ve got a melody. Recently I’ve come to Martin a few times with a chord progression and words for the verse, but no melody for the chorus, and just said I want these words to go into a chorus. It has to or it doesn’t make sense. I need you to do the hook.

M: Sometimes it’s the other way around too, I’ve got a tune and I go to Elliot and ask for some words. There’s a lot of back and forth and what we start with is often very different to what we end with. It’s quite a refined process.

E: I tend to have a chord or a key and a loose melody and what happens most of the time is Martin will tweak my melody and put something on top of it. Most of our songs can’t be done with one vocalist, so it takes ages. We like to try and make the songs interesting and conversational.

What’s the deal with your song titles? They don’t have anything to do with the songs…

E: They do a bit more now because I keep getting shouted at for not just naming them a line from a chorus or a hook, but in my opinion, and this is the same for artwork and t-shirts and that sort of thing. If a song is your chance to say something or express something in an artistic sense in your song titles or your EP titles then why waste that opportunity by just saying “this song has the words let go in it so let’s call it Let Go”. But now the songs are tangibly linked because the rest of the guys have said let’s work out why and see if it can be linked to the topic of the song.

M: There is a slightly more dull side to this as well. We’ve been writing a lot recently and when you’ve got six new songs all with abstract names, we’ve been like “which song are we playing now?”

E: When I present a song title and people like it but aren’t really sure how it links to the song, I just freestyle a bullshit reason about why it’s linked. You can tie them it a bit, but most of them are just pop culture references to be honest.

Like Six Seasons and a Movie, which is named after possibly the greatest TV show ever…

E: Six Seasons and a Movie just sounds like a song title to me. You can take whatever you want from that. It’s cool.

You guys are based in York, what are your thoughts on the local scene here?

M: It’s good for such a small place.

E: Surprisingly busy for such a small place, which is a good thing. It means people are still into writing and performing music.

M: There’s a variety of venues of different sizes to go and play at. I remember running into trouble in Leeds where the venues which are of a certain size are almost impossible to play at and you reach this ceiling, whereas that doesn’t seem to be the case with York

E: Like, now we’re playing at The Fulford Arms and it’s a donations entry gig, and when I was younger I often felt priced out of shows. Not because venues shouldn’t make money and bands shouldn’t be paid, they should, but if you’re younger and you don’t have a job, four or five quid for a show when you’re 16 is a lot. It’s good that there are places like this. There are a lot of different styles of music too. Indie is still popular, which it always is. There’s a lot of metal in York.

M: With all the small pubs and stuff as well, if you’re into the folkier thing, there’s a lot of that

E: I think it’s good. It’s very healthy for a small town. It’s important because if you’re younger and you’ve got no shows to go to you’re probably not going to start your first band because even though you want to play guitar gigging doesn’t seem obtainable if you’re not seeing bands play in the backroom of a pub. We used to go and see our friends play at The Junction.

Do you think being York based has had any impact on you as a band? For example being based in London probably has a better chance of being recognised but there’s also the big chance of just getting lost in a massively saturated market…

M: I don’t think it’s a massive problem. As you rightly say, if you’re in London then that’s where all the scouts are, so if you’re wanting to get picked up and signed or whatever then that’s where you need to be. But in the North, within an hour’s drive if York there’s plenty of big places you can play.

E: The only negative thing would be, apart from The Barbican which is much much bigger, we’ve got places that can hold 500-700 people, and because Leeds is such a well known stop off for tours, we don’t get a huge amount of big bands come through. When I see bands that I like are touring, even though we’ve got venues the same size here in York, they’re playing in Leeds, so that kinda sucks in terms of trying to get on shows with bigger bands. There hasn’t been a band come through York where we’ve instantly thought that we need to get on the phone to the venue and try to get that support slot. If I email someone in Leeds they don’t know me, they haven’t seen us play, so that doesn’t help. For every negative there’s probably an equal positive.

M: As I was saying before, the fact that everything is close together is great. We can just jump in the van and with in an hour and a half we can be in Manchester, Sheffield. There are some big places that you can go and play.

E: Yeah, you can probably do a week long tour without going further than Derby. So that’s good. There’s so much going on in London all the time that it would be quite hard to get someone out to your show, but now if we go to play in London people might wonder why we’ve come all this way and want to check it out.

So what does the rest of 2017 hold for Feed Them To The Forest?

E: We are doing three dates of the Ducking Punches tour in April, two of which are also with Apologies, I Have None. We’ve got a couple of other weekenders planned but nothing is set in stone yet

M: We’re also going to be recording imminently. It’s going to be an EP, maybe five songs. We’re got more…

E: Last year we put out two singles so I think the natural follow up would be an EP. I don’t think there’s call for an album yet, so we’ll put out a couple more singles and an EP.

M: In this modern internet age, unless you’re big it’s difficult to shift albums. What people want to see is a high quality youtube video

E: The reason we’re doing an EP and putting out a couple of singles with videos is with the singles we brought out last year we found that people interact more with a visual presentation, rather than just audio. People are still checking us out on iTunes and Spotify but video plays absolutely soar. I’m the same, if I’ve got the choice to stream a single or watch a video for it, I always head for YouTube.

Let’s end on a silly question. In the event of a zombie apocalypse, what would be your weapon of choice and why?

M: For nostalgia I think I’d quite like the Shaun of the Dead cricket bat.

E: What is it, you’ve got to destroy the brain or remove the head? Easy. Bandsaw. Through the neck, or if they’re coming straight at you, through the forehead.