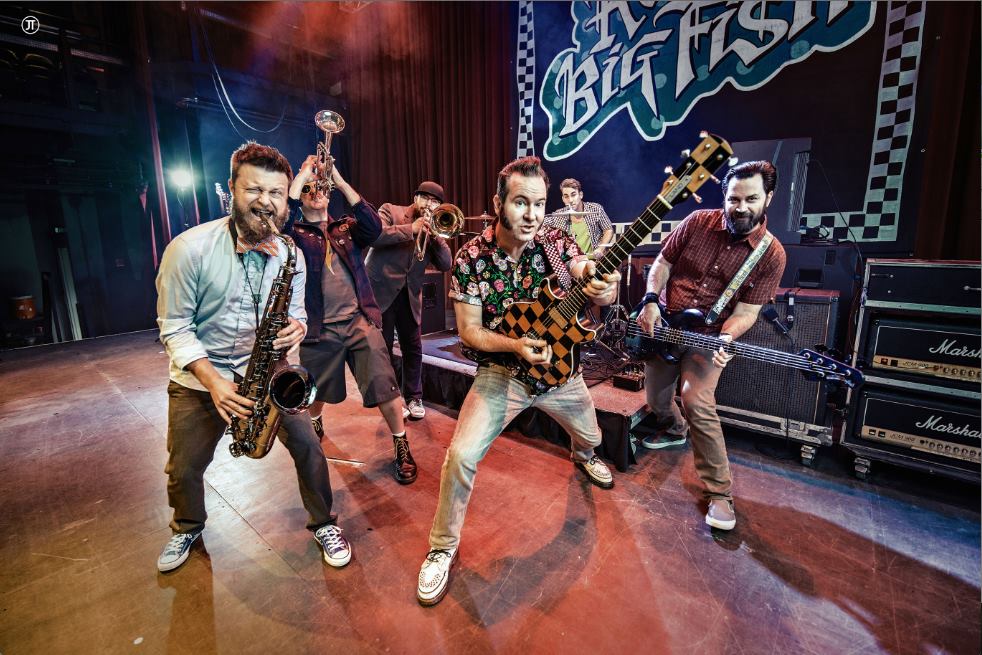 Five bands. Ten quid entry. Free Fireball whisky being handed out. Seems like the perfect gig, right? Well, fortunately, the point of this article is to tell you all about it.

Leeds band Eat Defeat were the first to take to the stage. Unfortunately due to the incredibly thorough security checks and the fact that Eat Defeat went on just fifteen minutes after the doors opened, I missed their first couple of songs. From what I did manage to see though, this is a band that could get used to playing stages this size. They’re on the poppier end of the punk rock spectrum, and they’re an incredibly tight live band with big catchy choruses designed to have thousands of people screaming every word back, as they proved when they asked the crowd to join in with a chorus of “I think we’ll be OK” during their final song.

Next up were Sheffield pop-punks Sweet Little Machine. I’ve seen the Sheffield pop-punks play once before when they supported Patent Pending at The Key Club back in April. They’re a fun live band with some brilliantly catchy songs, however I struggled to get past the way the frontman was onstage. He’s got a very similar stage presence to Billie Joe Armstrong. That can’t be a bad thing, right? That guy has tens of thousands of people eating out of his hand every night. No, I mean it was very similar to the extent of copying every mannerism. Once he finds his own identity on the stage, the sky is the limit for Sweet Little Machine, because they’ve certainly got the songs and the confidence to go all the way.

Mad Caddies are a good 20+ years into their career, and on a line-up topped by Reel Big Fish, you’d expect them to know exactly what to do. It’s no surprise then, that the response to their set was awesome. I’m not overly familiar with a lot of their songs, but their delightful mix of ska, reggae and punk rock went down a treat. Over the past few years I’ve seen Anti-Flag upwards of fifteen times, and unlike some bands, it just never stops being fun! (More on that later.) From the second they exploded onto the stage with The Press Corpse to the moment they left after closer Brandenburg Gate, which was played in the crowd, the energy didn’t let up. There were a couple of new songs from forthcoming album American Fall, including When The Wall Falls which featured a guest appearance from the Reel Big Fish horn section, and an excellent cover of Should I Stay or Should I Go by The Clash. Anti-Flag are a band on top of their game right now, and with a stunning new album just around the corner, the sky really is the limit for these punk rock veterans. I don’t usually grade performances, but this was certainly 10/10.

A perfect showing from Anti-Flag then would take some beating. This was time number twenty one for me seeing Reel Big Fish, and to be honest, there was nothing in this performance to justify seeing them so many times. With frontman Aaron Barrett being the only member of the band still there from the first time I saw them thirteen years ago, everything about their show suggested that they’re nothing more than a band going through the motions, dragging out a once awesome career for far longer than they should. Sure, hearing songs like Beer and Sell Out in a live setting can be a lot of fun, and I’d imagine if you were quite drunk and right at the front, you might still have a great time, but there’s just something missing from their show these days. The music is upbeat, there’s movement onstage and in the crowd, and yet somehow everything just feels a little flat. They were really great at Slam Dunk earlier this year, but this time, unfortunately, they just weren’t.