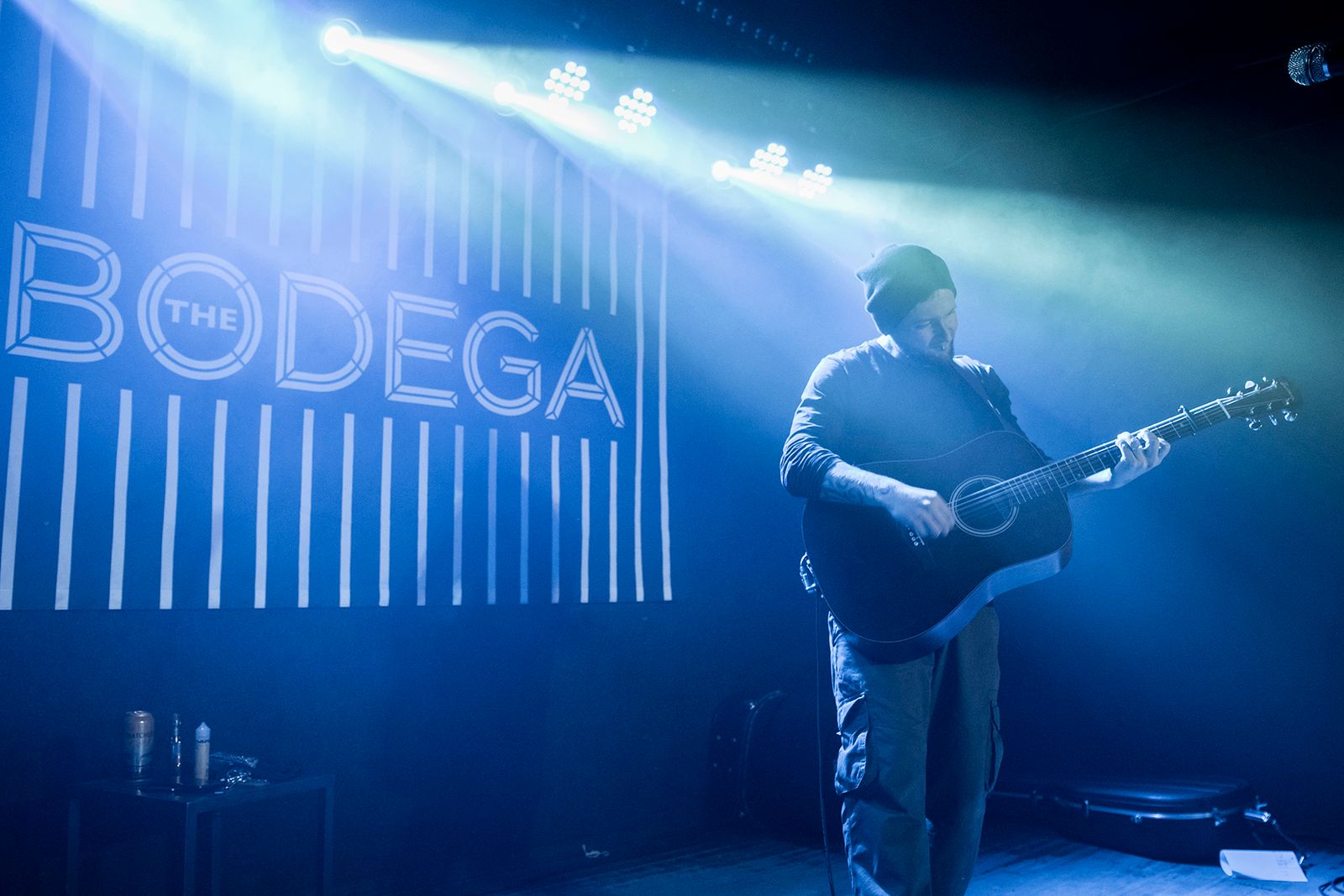 We recently caught up with our good buddy Jake Martin to chat about his relentless touring schedule, his plans for releasing new music and his thoughts on the DIY scene in the UK.

Hey Jake! How the hell are you, sir?

Hey dude! I’m great thanks! I am having my obligatory 5 morning coffees, listening to Roughneck Riot’s ‘Out of Anger’ and eating a home-made breakfast Burrito the size of your face! I can’t complain!

For anyone that isn’t yet familiar with you and what you do, could you tell us a little bit about your music and what influences the sound that you make?

Sure. I’m an acoustic singer-songwriter, cos you know, we just don’t have enough of them already. I play folk punk or as I now prefer to call it “Lost Folk.” (See Gaz Brookfield’s next album for an explanation of why!) Basically it’s me, my guitar and my thoughts on the world and the people in it. A lady in Memphis once told me I sounded like the unwanted bastard child of Frank Turner and Sam Russo. I quite like that description, I think she meant it as a compliment. My influences? Man! I could talk about music forever so I will try and condense it! My first big love was Nirvana. The energy, honesty and straight up sarcasm of Cobain blew me away! At age 12, I had never seen or heard anything like it before! Thanks for nothing Britpop! Rage Against The Machine are still a huge influence on me! The idea that music and the people making it can still make changes in the world is one very close to my heart, and growing up RATM were one of the first bands to show me it was possible. Standing shoulder to shoulder with a few thousand people screaming “Fuck you I won’t do what you tell me” age 15 changed me forever! The Levellers get a huge mention! I was hugely into punk and metal (still am!) growing up and usually if it wasn’t a Phat riff, a blast beat or double-time it probably wasn’t getting my attention, then my brother Rob introduced me to The Levellers! It was a total game changer and I fell in love instantly! He taught me loads of their songs on the guitar and we would go busking for hours. It was the first time I ever ‘attempted’ singing! There are tonnes more but those are my top 3.

You’ve just wrapped up a massive tour with Ferocious Dog. How would you describe that, and what were the highlights?

It was absolutely amazing! I loved touring with FD! They are great guys to spend time with. New friends for life for sure. The shows were all awesome! The crew and management were lovely and super on it and FD’s fans were wonderful to play for. They came out early every night of the tour to show their support to a sweaty little prick with a guitar and made me feel very comfortable at every single show. All the shows were incredible but my highlight was playing to a sold out Nottingham Rock City! Hearing that many people singing my songs back at me is not something I will not soon forget! I loved doing a duet with Ken Bonsall each night too.

You’re heading out on an extensive headline tour soon. After two big support tours with FD and before that Gaz Brookfield, what are you expecting from those shows?

Both of those tours were great and I certainly got to play to a lot of new people! All I can do is cross my fingers and hope that the people that came out early to watch me play on those tours will come and watch me headline my own tour in July. I am not expecting a huge change though, if my crowds at live shows grow of course that’s awesome but if there is no difference at all I won’t mind. Gigging is basically the best job in the world so I am super happy no matter what. .

You’re also playing at our big do, One For The Road Festival later in the year. How much fun will that one be?

I can’t wait mate! That is one tasty line up. If that show doesn’t sell out I will eat B-Sydes shoes, whether he likes it or not! All jokes aside, I am really looking forward to it! Thanks for having me!

The DIY scene in the UK has so many wonderful people that you get to share the stage with week in week out. Who should we be checking out?

Yeah we are really lucky. So much good DIY music on this tiny island! I would say Jake and the Jellyfish, Roughneck Riot and Ducking Punches but I think most people are more than aware of those bands these days so they are kind of obvious. Jess Silk is one to watch out for! She is amazing, a great songwriting and super down to earth. Jess is gonna go far! B-Sydes is, in my opinion, one of the most talented singer songwriters out there. His full band shows are amazing too! One of the other supports on the FD tour was a Leeds based band called Weekend Recovery. They blew my socks off and I would definitely recommend them! Annas Anchor, Arms and Hearts, Joe Tilston, Harker, Billy Liar, Sam Russo, Matilda’s Scoundrels, The Lagan, Maelor Hughes and of course Gaz Brookfield. I could go on forever!

And of course, you all need places to play. Are there any venues, regular nights or festivals that really stand out as your favourites?

Oh man, so many! For festivals my faves are Beautiful Days, Boomtown, Something To Smile About, Ey Up Mi Duck, Roytonbury, Watchet… to name a few. As far as venues go, I have a long-standing love affair with The Maze in Nottingham (big up Gaz and Steph!) which is soon to close, unfortunately. I also love The Cavern in Exeter, a great venue with such an awesome history! The B2 in Norwich, its an ace venue and the manager Em is a total legend! The Greystones in Sheffield is lush and I always love Playing Wroot Rocks just outside of Doncaster. Neil and Amber really know their stuff and spoil us smelly music types rotten! There are so many more, it’s another never ending list!

Do you have any immediate plans to release any new music in the near future?

Yes! I have now got my dream full band together and we are working on songs for the next album already. I have also written a load of new acoustic songs. The plan is to either release 2 albums early next year or perhaps put them together and release a double CD/Vinyl. I haven’t decided yet but there is a tonne of new music on its way!

Hollywood calls, they’re making Jake Martin: The Movie. Who stars as you?

Definitely a big thank you to everyone thats helped me do what I love for a living for the last few years! I promise I really appreciate it. I am far from famous but the friends and fans I have made doing this for the last 5 years are the fucking best! I can’t wait to get all the new songs recorded and out to you soon! Also as mentioned above I am back out on tour in June and July, all the dates and ticket links are at www.jakemartinmuzic.com if you wanna come out and say hi that would be ace! Lastly, I guess just continue to be awesome! I know it sounds super cheesy but being a DIY musician in the UK really is an incredible experience! Bands, artists, promoters festivals, music lovers, it’s all one big family and I hope we always keep it going! Fight for your local bands and venues! Fuck covers bands! Thin Lizzy were a pile of wank the first time round, for fuck’s sake. And Starbucks coffee tastes like shit! Oh and don’t forget to come to One For The Road Festival in October! It’s going to amazing!