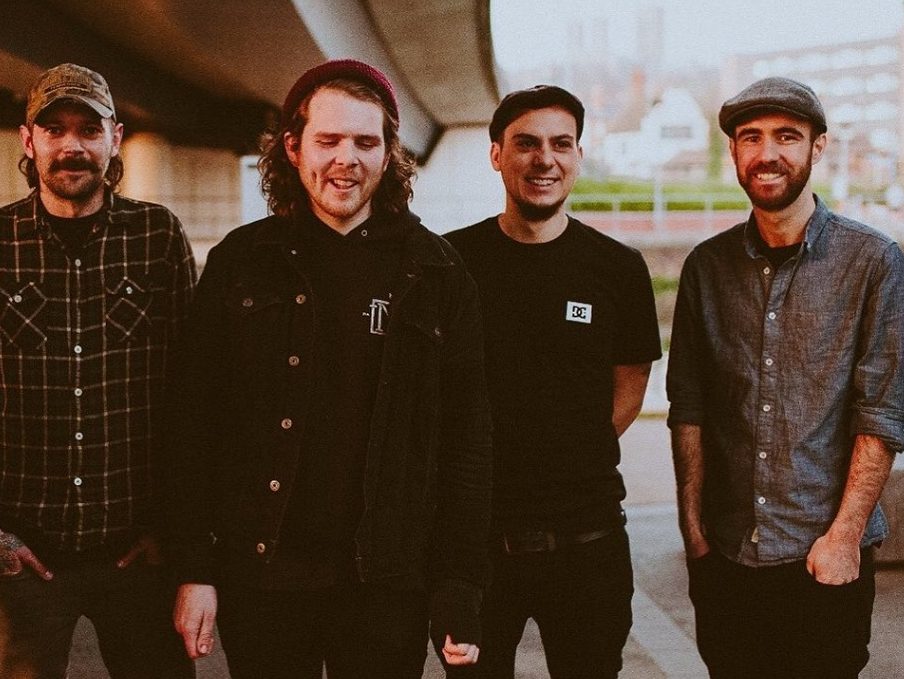 We recently sat down with Jake of Jake & The Jellyfish fame to talk about what the band are up to, the DIY scene in the UK and playing at Punk Rock Holiday…

Hello Jake! How are you, sir?

I’m very good thanks! A few days back from tour so I’m over the ‘it’s nice to be clean’ part and ready to be busy again.

Last time we sat down for an interview ahead of the release of your last album, there had been a couple of line-up changes. It seems that’s happened again. Could you tell us a little but more about that? Do you have a band member that’s particularly hard to work with? I bet it’s Caffs…

Ha! I’d love to spread some sort of weird rumour about Caffs, but alas he’d struggle to be anymore lovely, other than his strange collection of Meat Loaf memorabilia, of course. Yeah we’d had a bit of re-shuffle, being in a band at this small level and being as active as we are can be a hard balance. In this last year we’ve introduced our new guitarist Jonty, who is not only a super nice guy but has added a new side to the songwriting too. His influence with riffs and chord structures has been really interesting and added loads to that process. We’ve got a good team at the moment and I’m really excited with what we’ve got coming up.

You’re heading into the studio soon to record some new songs. What can we expect in terms of a release?

To be honest I’m not sure, we’re gonna see what happens with it. I’d like it to be some sort of pre-curser to an album, we’ve got a few other strong ideas but we wanted to get these songs down as it really felt like the logical progression from Long in Winters. Keeping busy and moving forward I think is super important.

How much influence has the new line-up had on the sound of the new songs? Obviously, the violin is missing…

Long in Winters moved quite a bit away from the old folk/punk sound. I still write a lot of the songs on the acoustic guitar first but that’s not ever how the songs were intended to stay. As a band we have been moving further towards a heavier side from day one that’s just where our influences tended to lie. Our set list has moved further and further away from the whole folk side too and the new songs, like a lot of LIW, weren’t written with violin in mind. So moving away from that just made sense.

Punk Rock Holiday is coming up. How excited about that show are you?

Veeery excited. I’ve attended as a punter in the past and it’s just such and incredible location and great vibe. Like everybody is just having such a good time, the idea of only having 2 stages and no clashes is also so good. It’s such a chilled out affair!

What other plans have you got for touring this year?

We’re touring our way too and from PRH, got a few shows at the end of summer too. I’m sure there’ll be plenty of stuff after that also, I get itchy feet very easily!

The DIY scene in the UK is home to so many incredible bands. Who should we be checking out?

Get asked this a bunch, Petrol Girls need no introduction – they’re one of the best live bands going. Arms & Hearts is a great solo act who’s worked his arse off the past few years.

And of course, all of these great bands need places to play. Are there any venues or regular nights that stand out as your favourites?

Yes! The Exchange in Bristol is doing so many great things for DIY Punk Rock and is now community owned which is incredible. New Cross Inn in London too and I’m very sad to be saying goodbye to The Maze in Nottingham.

There have been a lot of stories and allegations over the past year about the inappropriate behaviour of many people in bands abusing their position of power/influence. Do you feel that there’s an extra responsibility on bands now to ensure that not only gigs, but the music scene in general is a place where people can feel safe, and stamp out any untoward behaviour?

That responsibility should have always been there. The Punk Rock scene, and music scene in general is meant to be about helping each other out, looking out for each other and respect. It’s super important to look after each other and we should be willing to learn from mistakes and improve ourselves, our environments and learn. I don’t think it’s more important now than it ever was, I think it was just overlooked and ignored more beforehand, but awareness is growing and we need to encourage that.

Rumour has it Craig likes Nickelback.