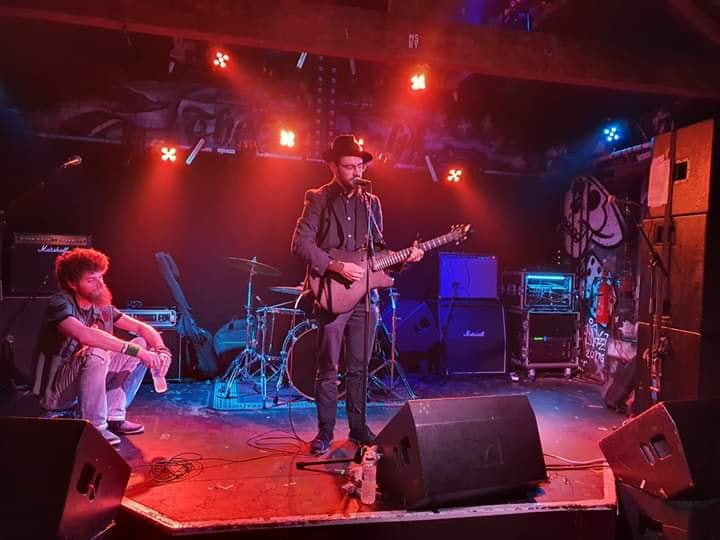 Recently the infamous high flying, high energy Wolfe Sunday transformed from his Wolfe like persona to that of Laurence Crow and the Imaginary band. Fear not Wolfe Sunday fans although he’s going under his own name the shows are just as high energy and the music is just as great!

When fans were introduced to his first single “Evil Eye”, it was like someone was letting the Genie out of the bottle and gave this totally unpredictable legend the license to write and do whatever he damn well chooses, and I for one love it! If you’re a fan of Tom Waits, Nick Cave and The Bad Seed or even Lou Reed this the guy for you.

This single is totally DIY with Laurence recording at his home home and being accompanied by Brandon Neal on Organ and banjo! This track captures a darker side to Laurence Crow that we haven’t seen before in his earlier stuff, but what adds familiarity is that although it’s dark and raw, it’s still got the catchy melody that draws you and makes you want to sing along. It’s not hiding anything and captures a vibe I’m sure Tom Waits would be proud of, literally after listening to this I stuck on “I Hope Don’t Fall In Love With You”, and the vibe of what Laurence Crow and The Imaginary band is going for clicked perfectly!

The image in my head when listening to this is like some dark bohemian bar drowned in smoke after one of the wildest nights of your life has gone way out of hand. It’s just you and some mates or even strangers sat around an old burning piano singing along. This for me is the campfire song for the underground music world.