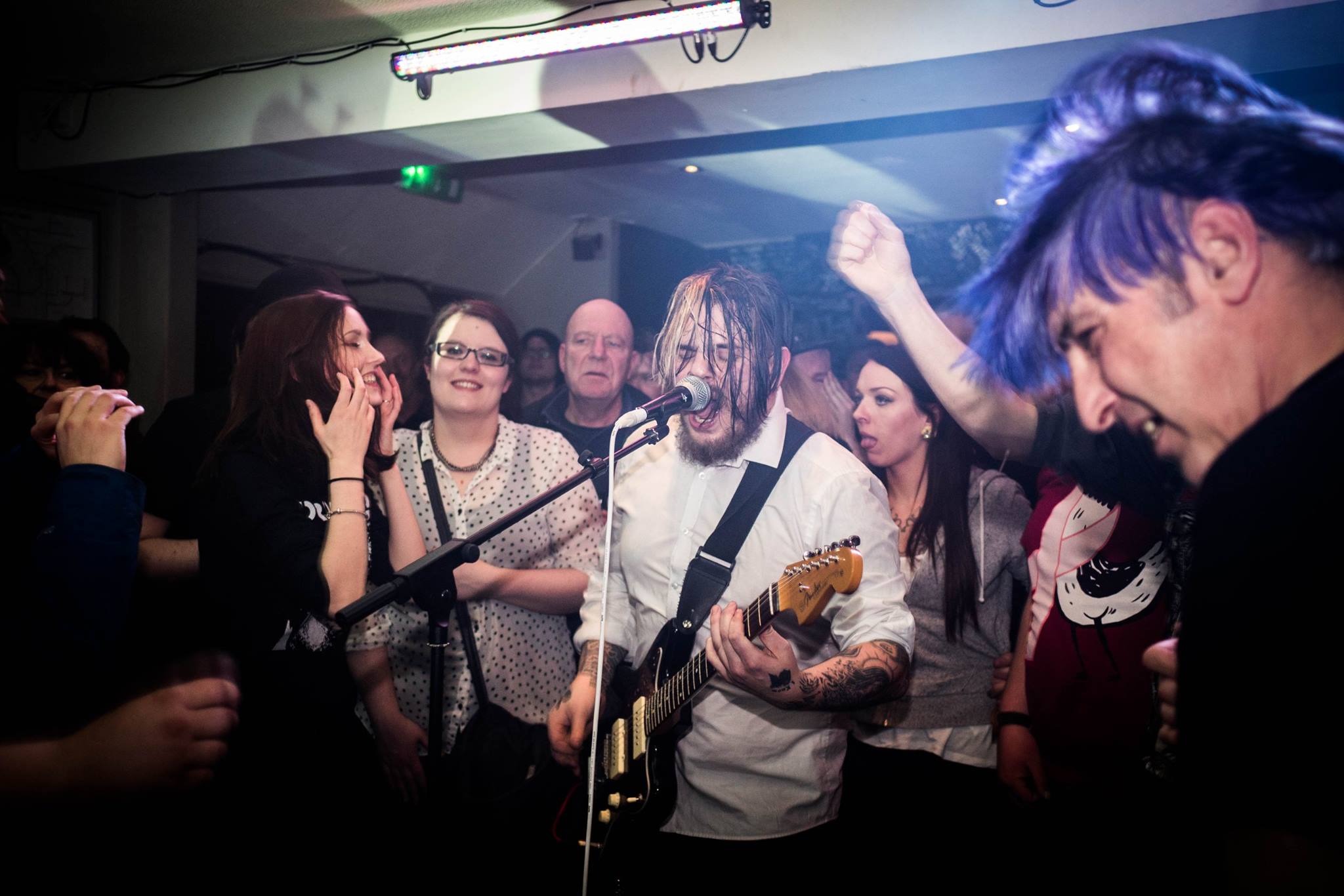 We recently sat down with Nosebleed frontman Eliott Verity to chat about the band’s reputation as one of the most exciting bands on the UK underground, their relentless gigging schedule and the hilarious potential cast of Nosebleed: The Movie…

Hi Eliott! How are things in the Nosebleed camp right now?

Alright, yeah! Very happy. We’ve just got a new drummer and we’ve done five or six gigs with him now. It’s all going very well, we’ve got a busy year ahead.

Cool. So, for anyone checking this out that isn’t aware of Nosebleed, what’s it all about?

Over the last couple of year’s you’ve developed a bit of a reputation as one of the must-see, exciting bands on the UK underground scene. What is it about your live show in particular that’s helped with that reputation?

Have we? Haha. I think it’s the energy of it, really. We get people involved, we go out there and go for it. We don’t like looking like we’re bored. It doesn’t matter if we’ve done a ten hour drive to get somewhere, we just get out there, put a lot of energy into it. We like to go out into the crowd and get people involved, get people singing. I don’t want to be stood onstage with everyone looking at me, I want to be in amongst it all, so I think that’s what it is.

You’ve got a pretty epic gig list already for 2017. Are there any shows you’re particularly looking forward to?

We’re playing Boomtown this year, that’s going to be very good. We’re doing Manchester Punk Festival again. TNS, Moving North and Anarchistic Undertones have been nice enough to ask us back to play MPF. There’s a few more festivals that we’re doing. OutCider Festival in… Somerset, I think? Where the cider is! We’re also planning a European tour for the end of the year as well.

Other than a tonne of gigging, have you got anything else planned for this year, if you can fit it in around all these shows?

Yeah, we’re writing the album. We’re going to record it and that should be out by the end of the year, or at least the beginning of next year. With all the record pressing plants being overloaded at the minute it’s a bit hard to get any vinyl out, but we are going for a vinyl release.

Nice! Obviously with all of these gigs you’ll be playing alongside loads of great bands that we might not have heard of. Who should we be checking out?

I’d be tempted to say Snakerattlers, but obviously people in York know a lot about them. We’re doing this tour with Black Volvo, a Dutch band. People should be listening to them. We played in Wycombe last Saturday with a band called Blue Carpet Band, very Doors-y 60s rock n roll. They’re a band to look out for because you don’t really see their name anywhere but they blew me away. And then there’s a lot of the bands that we’ve been going around with, Casual Nausea, Chewed Up, the bands that people have heard of like Revenge of the Psychotronic Man, Faintest Idea. These are all bands that are really working hard and putting a lot into the scene.

Hollywood calls, they’re making Nosebleed: The Movie. You’re in charge of casting. Who get’s the starring roles as the band members?

Chris Martin as Dicky. He looks a lot like him. I don’t know what his acting chops are like, but I think we could rope him in. Ben, I reckon, would have to be someone a bit funny but not intentionally funny, just funny to look at. Maybe Steve Buscemi. Or Adam Sandler. I don’t know who’d play me… I want to say a sort of Tom Cruise or George Clooney, but it’s probably more Jack Black.

Keep an eye on us. We’re probably coming to a town near you soon. We go all across the country, so come and see us if you can!

The photo at the top was taken from Nosebleed’s Facebook Page. It was taken by Pay No More Than Photography. Go like PNMT and tell them how ace their pictures are. The video was taken by the always delightful Mr Paul Aitch.