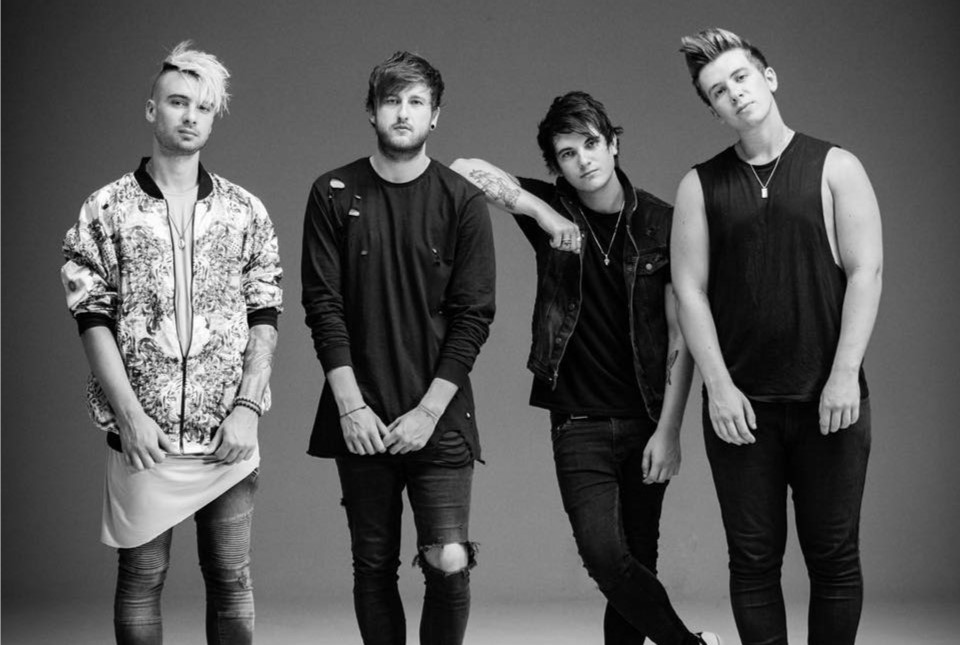 We sat down with Dean and Sean of Room 94 at the Pop Punk Pile Up Festival in Selby to chat about their new single, getting out there and playing shows in small towns and, as always, who would star in a Hollywood movie about the band…

Hello! Let’s start with an introduction. Who are you and what do you do in Room 94?

D: I’m Dean and I play drums and do a little bit of singing

We’re here at Pop Punk Pile Up Festival in Selby – have you had a good run up?

D: You know what, we havent. I left this morning at 11am and didn’t get here until 6ish. It’s been boring. A lot of traffic. But we’re here!

S: It’s all good. Get the drinks flowing!

Cool. So for anyone checking this out who isn’t aware of Room 94 yet, could you tell us what it’s all about?

D: Having a good time. We like partying and drinking a lot, doing stupid things. We try and reflect that in the lyrics too. We piss about a lot.

S: We just try and have fun, energetic music. We do have some serious songs…

D: We try and not take ourselves too seriously. We take the music seriously, but not ourselves. It’s all a bit tongue in cheek.

S: Everything we do and say is all banter!

We’re assuming this is your first visit to Selby. How important do you think it is for bands such as yourselves to get out there and play the more regional shows outside of the big cities?

S: It’s good. We’ve never been here, or even heard of it to be honest. If you think maybe ten years ago there used to be shows like this all the time, so it’s good that stuff like this is still happening. It’s fun for us to be part of a show like this where we wouldn’t usually come here. We might make some new fans.

D: It’s an adventure for us to come to somewhere new where people don’t know us. It’s fun.

Have you managed to check anyone else out since you arrived?

It is the Pop Punk Pile Up Festival…

D: We’re more pop rock. We do listen to a lot of pop punk.

The guys that are playing just before you, Blood Youth, aren’t pop punk either. They’re pretty heavy!

D: That’s the fun of it though!

Absolutely! Anyway, you’ve just announced a new single called ‘Get Her Off My Mind.’ What has the reaction to that been like?

D: I think it’s been a weird one. We’ve just taken some time off and come back with a single. It’s a weird one because the music world is changing and with social media, it’s really hard to reach people on Facebook without spending loads of money.

S: Especially for independent acts! You shouldn’t have to pay to reach your own fans on social media.

D: We’ve got nearly 400,000 likes on our page and posts reach maybe 10% of that, but from the people that have seen and heard it, it seems like a good reaction.

S: It’s a bit of a new direction. For anyone that’s listened to us for the past five years through everything we’ve released, we don’t really change our style. There’s the pop-punk influences, the big guitars, but at the same time we’ve always had the electronics going on. The last EP we did some of it was a bit like tropical house. If you put out the same album every time it gets boring for us and it’s boring for the fans. This new single is the biggest step into that.

D: This is the ‘comeback single’ which fits in with the current music trends, but live it will have the heavier guitars. I don’t think we’re going to play it tonight! I think it might be a bit too poppy for this.

On the back of that, what else can we expect from Room 94 this year?

D: We’re just confirming a lot of shows and tours. We’re going to get out any play some headline shows across Europe. We just want to get out and play some more show. If you’re a band and you take six months off, it’s a nightmare. It’s boring. We need to play live.

Cool. We also wanted to ask, given that there’s been a bit of a backlash to one of the bookings on this festival, how important do you think it is for gigs to be a place where everyone feels welcome and safe?

S: Everyone should feel comfortable.

D: This is people’s escape. There was a lot of stuff suggesting people should drop out, but people need this. This is their escape. Bands need it as well. Bands need fans, fans need bands. You need this whole gig, but it has to be a safe environment. Everyone should support eachother.

Moving on – Hollywood calls, they’re making Room 94: The Movie and you’re in charge of casting. Who plays the band?

D: What an amazing question!

S: I reckon it’s got to be Tom Cruise for me. Or maybe Ryan Gosling. Vin Diesel would do Dean.

D: Check us out on Spotify and come to a show. Even if we’re a bit different to what you’d normally like, come down, have a drink with us!