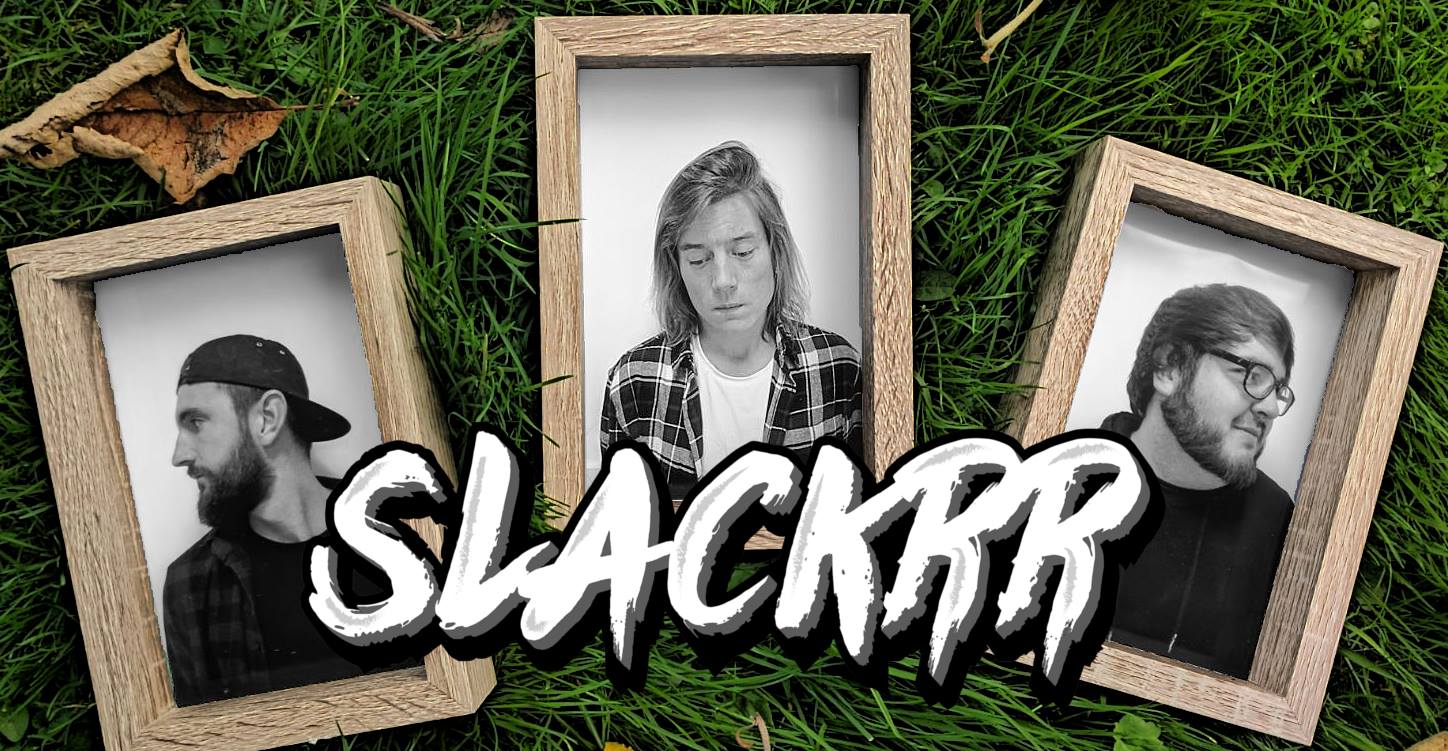 We recently caught up with SLACKRR frontman Scotty Perry to discuss the bands influences, plans for 2018 and what the scene is like in their hometown of Southampton.

Hello! Let’s start with an introduction, who are you and what is your role in SLACKRR?

Hello! My name is Scotty and I am one third of SLACKRR. I play guitar and sing and write the songs for the band.

For anyone unfamiliar with the band, can you give us a bit of an overview of what it’s all about?

We are a 3 piece Pop Punk/Emo/ Punk band (or that’s a few of the descriptions people have given us) from Southampton. We started this band in mid to late summer of 2017 after I met Matt through a friend who introduced us after Matt mentioning he was a fan of my previous band. We chatted about bands we liked and he mentioned him and Sam who had been friends since school had been trying to form a band for years so we had a jam and that’s us really.

On the first listen, I picked up a bit of an early 2000s pop-punk vibe over a modern pop-punk sound. Which bands would you say are your biggest influences?

Yeah we’ve had a pretty split response from people saying we sound “Old School” with a “New School” twist. We really take that as a huge compliment as it really reflects our diverse taste of bands we’re into and take influence from. Sam really likes a lot of new pop punk bands like Moose Blood, The Story So Far and Knuckle Puck but also is a huge Blink 182 Fan. I like a lot of the same stuff Sam likes but then I’ll go back further and listen to Jimmy Eat World, New Found Glory then Nirvana, Jawbreaker and The Get Up Kids and then really new bands like Can’t Swim. I just listen to loads of stuff for inspiration as we really don’t want to sound like everyone else, or at least try not to. Matt really likes stuff like My Chemical Romance and Being As An Ocean.

Your debut song, Closest To Perfect, was released in November. What else can we expect to see from SLACKRR in 2018?

We’ve just played a load of our first shows across the South coast in some awesome venues like The Fleece in Bristol, Facebar in Reading and our hometown Southampton’s Joiners which was great. We had some really nice responses. We’ve got a lot of shows up and down the country planned and booked for 2018, another single we want to record soon then an EP for the late spring if all goes to plan. We’re also about to release an acoustic version of Closest to Perfect toward the end of January which I recorded over Christmas as a nice chilled out alternative version to the single. So all in all we’re hoping to be super busy and playing to as many people as possible introducing people to our band and hoping they might even like it.

You’re based in Southampton – what is the scene like there and which bands should we be checking out?

Well as I’m sure you’re aware you can’t really talk about Southampton and the music scene at the moment without the name CREEPER being mentioned. In all honesty what those guys have done for the Southampton punk scene is amazing it’s made a lot of people have a look and see what’s going on down here. There are too many good bands to name at the moment down here. If you get a chance your best bet is to look up The Joiners listings to see who’s playing. I know Faux have a show coming up soon and those guys are a great band.

Hollywood calls, they’re making ‘SLACKRR: The Movie’ and you’re in charge of casting. Who plays the band?

I just text Sam and Matt as I wanted to be fair and see who they thought would play them. Only Sam replied and his response was “Well in my mind I’m basically a better looking Kit Harington so he can play me. As for Matt, probably tree beard from Lord of the Rings.” Make of that what you will. I’d like to be played by a young Christian Slater cos he just comes across cool, but then I read his Wikipedia page and he sounds like a bad ass which I’m not… OK, we’ll go with that.

Hypothetical dream tour. Slackrr + 3 other bands. Who are you hitting the road with?

That’s really tricky. I’m trying to answer fairly so I’ll say Blink 182, Knuckle Puck and Nirvana. Pretty sure they’ll draw the crowd we can’t and KC coming back for one last tour would be cool as we were too young to ever see Nirvana.

We’d like to thank everyone who’s checked us out so far and spread the word, thank you! All the promoters and venues that have booked us and let us play! Pash Stratton (Single) and Lucas Hardy (Acoustic) for recording what we have so far! And everyone who’s helped and or checked out our band come to a show and we hope to see more of you guys in the future. Also: drive fast, take risks, goodnight!