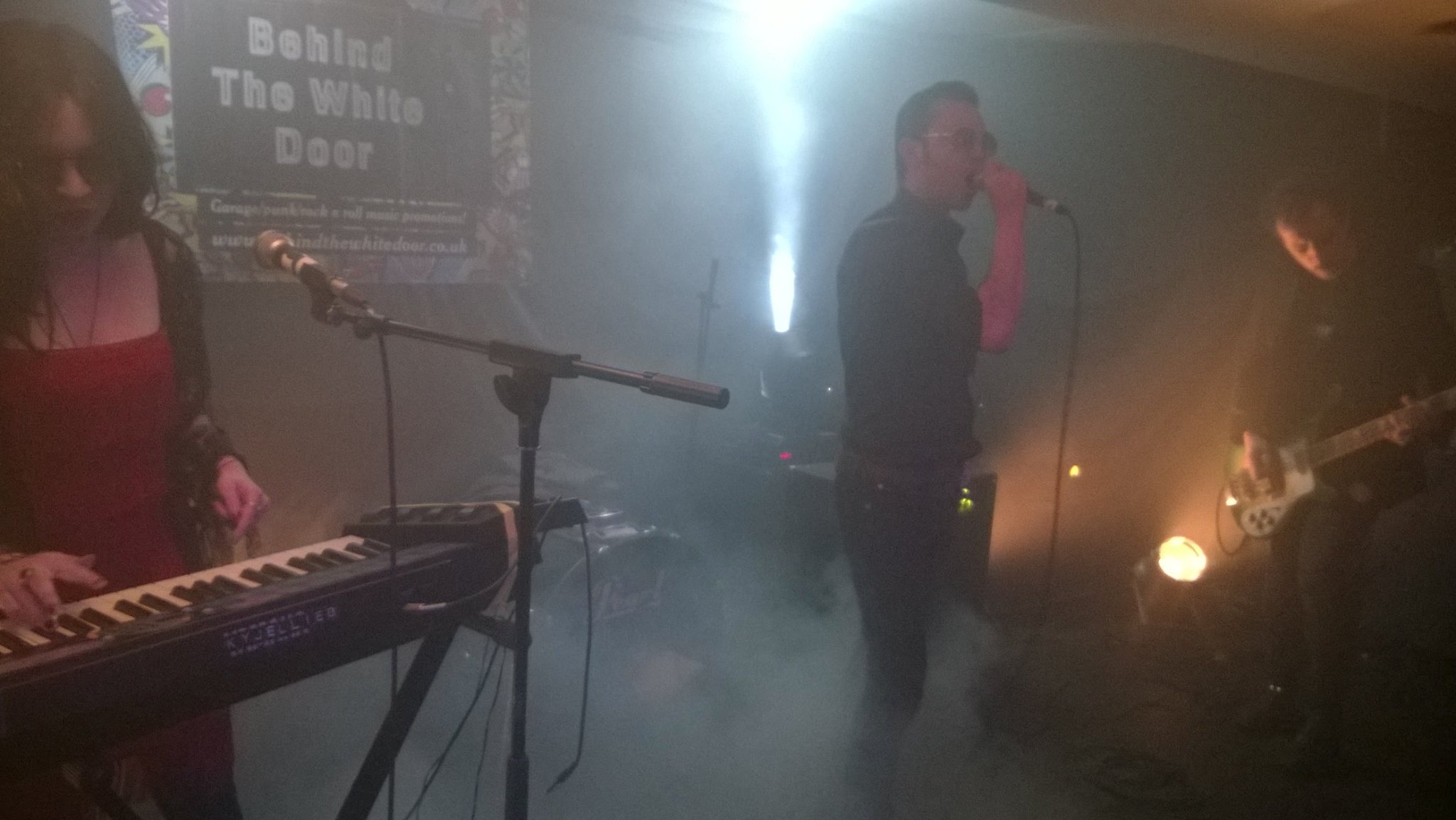 Now then. Dan here. My recent article, which was an overview of our local York scene, attracted a lot of comments and attention. Some negative, some positive. Either way, it got people talking about our local scene. I didn’t expect it to do that in the way that it did – I was merely trying to sum up our scene in my own words. It had over 700 reads in two days! I don’t even know 700 people! Even if I did, I probably wouldn’t like 699 of them. And I probably clicked on the link at least 20 times myself. But still, I am a winner.
–
A point of discussion that came from my article, was about setting up gigs, and the various different ways of doing it. Having this discussion, and typing my thoughts on the subject into the all-powerful Facebook, got me thinking about the origins, principles and practices of my own promotion; Behind The White Door. After having a brief discussion with Craig, it has been decided that now and again, I am going to write a piece under the title “Sterling Work”. Within these extra articles, I am going to explore ideas and unwritten rules, about the underground scene in York, and sometimes the UK scene as a whole. Some of you will agree with my views. And, if the reaction from the last article is anything to go by, some of you will absolutely not. But as an individual who has been heavily involved with the York scene since I was 15, my opinions, whilst not necessarily right, are viewpoints that I have gained through my own personal experiences. For that is all I can write about. Try to remember that before you attempt to boost your popularity by becoming a keyboard hero. Because I’m going to keep writing these whether you like it or not. If you don’t like what I have to say, then read something else.
– –
So, for my first entry in the series, I am going to say some stuff about what I think is the best way to run a gig. My goal from this entry is to explain how to get things up and running with regards to gigs, so that people out there wanting to set up a promotion, will learn an easy way to do it. Everyone’s got to start somewhere. At the time of writing, I am about to hit 80 gigs with Behind The White Door, so I must be doing something right. It’s probably because I am sort of addicted to putting gigs on. I have an addictive personality. Gigs are like drugs to me. Both watching them and playing them. I don’t take drugs anymore. I just inject gigs into my ears and eyes.
–
Disclaimer blah blah blah. The views discussed here are my own thoughts and ideas. They are not in any way reflective of the views of One For The Road. You can pay me later Craig.
–
There are a lot of pubs in York. 365 according to legend. One for every day of the year. And I would bet my last dog eared fiver that at least half of them have had some sort of live music on before. When me and Naomi started Behind The White Door, it was originally on a Wednesday night. That was because Wednesdays are usually a shit night for pubs. It’s not near enough to the weekend, and it’s still fairly early in the week. Most pubs have a steak night, or a quiz or something, as a way to bring punters through the door. But a lot of pubs would probably snap your hand off, if you asked if you could put a gig on and bring 20 or so people through it’s door. The landlord has to do nothing except supply the booze and the space. That’s exactly what happened at The Fulford Arms, nearly 4 years ago. So we rocked up on that first Wednesday with a buggered PA system and that was that. It began. It was that easy.
–
Obviously, hardly anyone came at first. Our first shows would attract about 10 people. But as it was on a Wednesday, the landlord at the time didn’t mind. The first year of putting on gigs at The Fulford Arms was pain. Bands sometimes played to just me, Naomi, Nelly and the bar staff. But the key here is that we didn’t let it stop us. Me and Naomi are both passionate about live music in York, and wanted to provide a platform for local bands and out of town bands alike. Now, i’m not saying that Behind The White Door is super popular, but it does well. It’s found it’s little place in the national scene. We get contacted by bands from all over the UK and bands from other countries. All off the back of that first shitty Wednesday night gig.
– –
–
The formula for Behind The White Door is simple. Free entry, a donations box passed round to pay the bands/cover costs and that’s that. We say to all bands quite clearly in an email that this is how we do it. They probably will get some donations towards petrol costs, but we can’t make any guarantees. I just treat bands how I expect to be treated when I play a show out of town. No bullshit – you’ll get some petrol money, but I don’t know how much until after the gig. If a promoter that specialises in my preferred genre of music said that to me, i’d be happy as Larry. I also provide some free beers, which is my way of saying thanks. We sometimes get contacted by bands who say they need a fee to play. These are not the sort of bands we book, and I feel sorry for any promoter that feels pressured into agreeing to those sort of terms. I am going to be writing a piece about bands who automatically ask for fees, but that’s a story for another time.
–
Bands that play for Behind The White Door are all in the same boat that my own band is in. We play music for the love of doing it, but like to try and cover our costs where possible. I like to refer to this type of band as “The Touring Band”. If a band reveals themselves to not be in that boat, they don’t get asked back to our gigs.
–
So if you’re wanting to set up a promotion, ask the pub or venue to do it on a not so great night at first (Sun, Mon, Tues, Wed). This is a way for you to test the water. Touring bands on the road are always looking to fill these nights. If you opt to put on a gig on a Friday or Saturday from the word go, then things don’t go as planned and your gig is empty, you will damage relations with that pub/venue. They could have had something else on to get people in on their busiest nights, but instead they gave the night to you for your new promotion, and you blew it. Also, the bands hate you now too, as you obviously don’t know what you’re doing – you can’t even get people to come out on a weekend party night. They’ll never play for you again. This was a disaster. Oh god.
–
Putting on shows on less good nights at first, gives you that fact to fall back on. Most bands have a common sense; they will know that getting people to come out on a Sunday, Monday, Tuesday or Wednesday is a hard sell, and doesn’t necessarily mean that you are a bad promoter. Most bands on the road worth their salt will be happy with the fact that you’ve taken a usually shitty night, and tried to make a decent show for them. If they complain that not enough people have come out or that they haven’t been given enough money, they are not worth working with again in my opinion. Only work with the bands who are grateful for you efforts. Nobody likes a greedy, selfish sod. There’s certain bands that I’ve never asked back to my shows, regardless of how good they are, due to their attitude problems. I much prefer bands who are in it for the love of music, like I am.
– So start small, but aim big for the future. Expect poor turnouts for a while. It will take a good few months (or maybe even a year like in our case!) before people realise that you put on a regular gig. DO NOT GET DISHEARTENED. Keep promoting the show, advertising, annoying shops by asking them to put your posters up, handing out flyers. It’s hard work and time consuming, but you need to do it if you’re serious. It’s like anything in life, if you don’t put enough effort in, it’s going to suck. It’s that simple. Actually being at the gig you’re promoting should totally stress you out. You should be feeling nervous. Making it a good night for your bands and guests should be priority number one. Remember, if you’re freaking out, it means that you care passionately about it, which is great! When you’re established through time and effort and you feel ready, switch the gig night to a Friday or Saturday. If you can prove yourself to the bar/venue by providing them with steady mid-week turnouts, they should be more than happy to let you try a weekend out. Hey presto, you now run a successful promotion.
–
In my opinion, promoting is easy. It’s the time it consumes and the stress it makes you feel that are the hard parts. If you are interested in setting up a promotion, this article has hopefully shed some light onto how to enter the world of promotion at a basic level. Who knows where you will be in 5 years time?! Maybe you’ll be dead. Maybe you’ll be married. Maybe you’ll be a successful promoter!