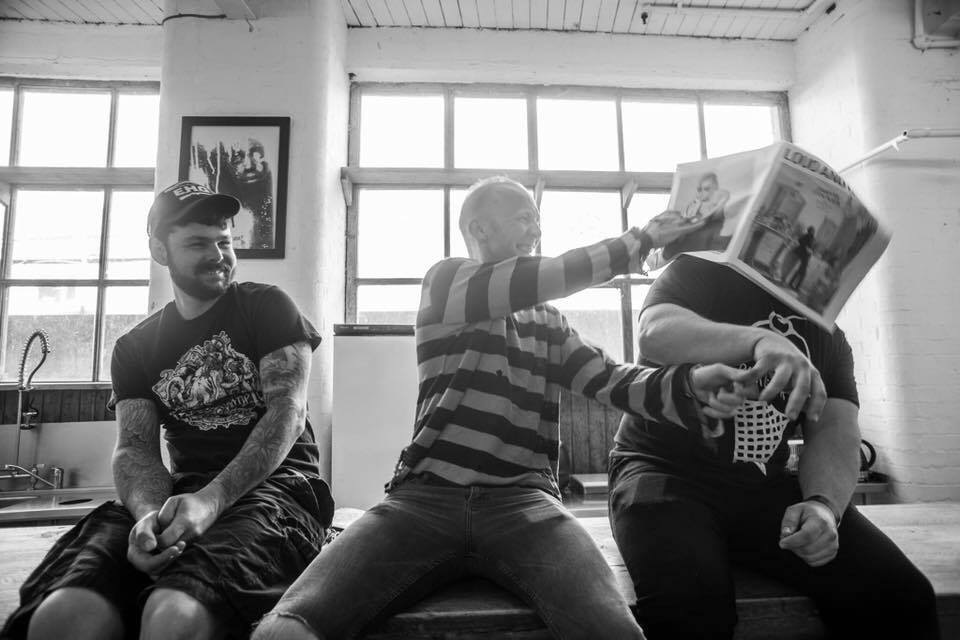 The Yalla Yallas have just released their third album, Medusa, so we thought it would be a good time to catch up with frontman Rob Galloway to chat about the album, the DIY scene in the UK and Europe and, as always, who would star in a movie about the band…

Hey Rob, how the hell are you?

I’m good thanks, aside from some ligament damage in my foot. I’m a little bit worried about the forthcoming gigs and whether I’ll hold up or not. I guess there’s only one way to find out.

The Yalla Yallas recently dropped album number 3 and people seem to love it, how happy are you with the response?

I’m absolutely delighted. The whole process has been so intense and so quick. We decided on our last tour in November 2016 to start work on this record. Me and Will came up with a tracklist and we booked a tour for July 2017. We just assumed it would be a CD release and that we could work on it right up until the end of June. What actually happened was we came off tour, booked the studio and then I wrote 25 new songs by the end of January. So we learnt and rehearsed some of them and the dynamic completely changed. We thought about doing a double CD album and then we thought about a vinyl release. We knew that whichever decision we made we had to make it fast in order to have it ready for the tour. We opted for the vinyl which meant a twelve track single album. Problem with that is it takes three months to press a record and we were already in March. It left us with the Easter weekend to pretty much record the whole thing. Insane. Which meant we all had to be on fire to meet the deadline. We just went in and smashed it out. I think that adds to the cohesiveness of the record. We didn’t have time to over think anything. We worked on instinct. As a result It’s an honest record that I think people can really relate to and I’m highly delighted with the response so far.

I think it’s fair to say that musically, this album is a more diverse than people might have been expecting. Were there any specific influences that helped to broaden the sound?

Yes, I listen to a lot of non-punk music. In fact I rarely listen to punk. I’ve heard enough punk bands to last a lifetime through playing live or when I was presenting my punk radio show. So when I’m at home I like to listen to Nina Simone, Nick Cave, and Buena Vista Social Club. I think this is reflected in the more diverse songs on this album, the Mi Corazon’s part 1 + 2, and Mentira. These songs inparticular were influenced by an old Hispanic folk song called ‘La Llorona’ (Weeping Woman) its a tale of this Lady who was cheated on by her husband, she went to the river and drowned her children in revenge. Legend has it that you can still hear her cry by the river. To this day small children are told to be home before nightfall otherwise La Llorona will come to take them to the river. I love these old latin folk songs. Sometimes I tune in to Peruvian or Ecuadorian radio stations just to listen to the sounds whilst I’m reading.

Lyrically, there’s always been a left-wing political theme to the band’s songs. There are a lot of other bands out there with a similar message who don’t necessarily practice what they preach. What are your thoughts on bands using politics as little more than a marketing technique?

There is most definitely a left-wing theme but I think we’re a little more subtle with the delivery. We try not to preach. I’d rather promote our message from within the songs. We’ll play gigs for causes we support and I’ll do my thing away from the band. As for other bands not practising what they preach, I think we can all be accused for that at times. I might have had a Starbucks at a service station whilst the same night rallying against them. Ultimately I think if a band is using their political stance for a positive world then that is great. The ones who are overtly hypocritical tend to get called out. It’s hard to hide from it in this day and age. People are smart with the bands that they follow. It doesn’t take much for the word to get round if someone isn’t being particularly true to their cause.

You’re about to head out to mainland Europe for a few shows. UK bands always have a lot of good things to say about shows out on the continent, what is it that makes touring out there so much fun?

Touring is so much fun in Europe because we are treated with so much more respect from venues. It’s pretty common to be supplied with beer, food, petrol money and a place to stay. Which you would think would come as standard anywhere in the world. We have a lot to learn here in the UK. Recently I helped a Belgian band with a show, they were highly delighted with the hospitality from our end but the other English shows on the tour were embarrassingly poor from the venues. No one put them up. They were allowed only one beer each. No food on offer, and certainly no money. It’s subhuman to be honest. When us English bands go out to Europe they get us pissed, jam with us all night long, feed us well, and a place to stay. You make friends everywhere you go. What’s not to love?

After the European tour, what does the second half of 2017 hold for The Yalla Yallas?

We have gigs booked right up until Christmas. We might go back in the studio to record an Acoustic E.P. or to finish some of the songs that we left off the album. In all honesty though I could do with some time off from the band to do some normal stuff like dating or going to the pub with friends. It’s been an intense two years.

The DIY scene is generally pretty switched on when it comes to a lot of social issues. Recently there seems to have been a lot of focus on calling out potential sexual assault, with accusations being made against certain bands. You mentioned that in light of this, it could change the way you approach your live show. Can you tell us a little more about that?

Yeah the DIY scene is great for calling out injustices and we’re really proud to be a part of it. Whilst recording we were reading an NME article about an incident with a famous band, in which someone took offence at a show and resulted in allegations of sexual assault. This sparked a discussion within The Yalla Yallas about safeguarding myself and our crowd at our shows. I often play gigs in just my boxer shorts. Sometimes our gigs can be chaos. I’ve had people try to remove my pants,  put their hands down my pants, pour beer in my pants, I’ve had women and men try to kiss, grab and fondle me. There was an incident in Bradford recently that was pretty pornographic, I’ve been physically assaulted and even someone try and strangle me. I don’t think I’ve ever particularly asked for any of that, or consented to that. I go with it as part of the show. If there is anything I’m particularly unhappy about then I’m not afraid to stop a show or deal with it, but I must stress this: On the whole our gigs are a whole lot of fun and I’m happy to take part in the daftness. I totally understand the frenzy a Rock n Roll band can whip up. However, recently I thought about what if someone was to take offence at the way I was being treated and could one of our fans having a good time be accused of something untoward. Or what if I was accused of using my power as a frontman to manipulate a situation? The whole thought was quite worrying, so I spoke out about it to find out what our crowd thought. We’ve always had a diverse intelligent audience and the verdict was unanimous that we shouldn’t change our approach because people feel that I’ve always been very respectful to our audience. In fact they actively encouraged me and give me the confidence to carry on doing what I do. The following gig  was amazing, the cheer we got when I removed my jeans was incredible. What I wish to promote with The Yalla Yallas is that our gig is a safe space for people of all genders and sexual orientation to come and enjoy a Rock n Roll show. If anyone wishes to join me in their pants and be proud of their bodies then that is most welcome but please respect everybody else. It is not an invitation to grab anyone else or to treat anyone unkind but dancing in your pants is a whole lot of fun. More people should do it.

You get to play alongside a lot of underground bands that we might not know about, both in the UK and Europe – who should we be checking out?

I would recommend  ‘Barleycorn Bastards’ from The Netherlands. If you like the Pogues then you’ll love them, a real good live band.  Then I’ve got to say ‘The Sick Boys’. Jef is one hell of a frontman, they are from Belgium and would be suited to fans of Social Distortion, Rancid, and Gogol Bordello. One of my favourite people though is Vince Cayo he’s just released his debut album and its a corker, he is influenced by Flogging Molly, Dropkick Murphys, and Tim Barry. I can’t believe he writes the songs he writes at the age of twenty. I can only imagine how he will progress over the next decade. If he doesn’t become a well known name in the Punk scene then I would be highly surprised. This kid has it all.

Hollywood calls, they’re making The Yalla Yallas: The Movie and you’re in charge of casting. Who plays the band members?

Easy. I would have Rhys Ifans to play me. He looked great in Notting Hill in his pants. Though I did ask my workmate Lynda about this question and she said she’d get Bradley Cooper in for me. I’ll take that all day long. Will Grinder would have to be played by Eric Bana who played the mean Chopper Read. Wills got that Chopper look about him. Joel Murray would have to be played by Sean Bean as they’re both dudes from Sheffield. So I think Sean would be able to get his accent down nicely. I’d love to see Sean Bean in Joel’s clothes. Matthew Dempsey is a tricky one. I’d have to say the guy who was Marky Mark and the Funky Bunch, he seems to be in every film lately, Mark Wahlberg that’s it. That’d be a pretty badass film.

Yeah I’d just like to thank everyone who has bought the album so far. The response has been incredible. I’m quite overwhelmed to be honest. See you all for hugs and beers on the road. Rock n Roll.