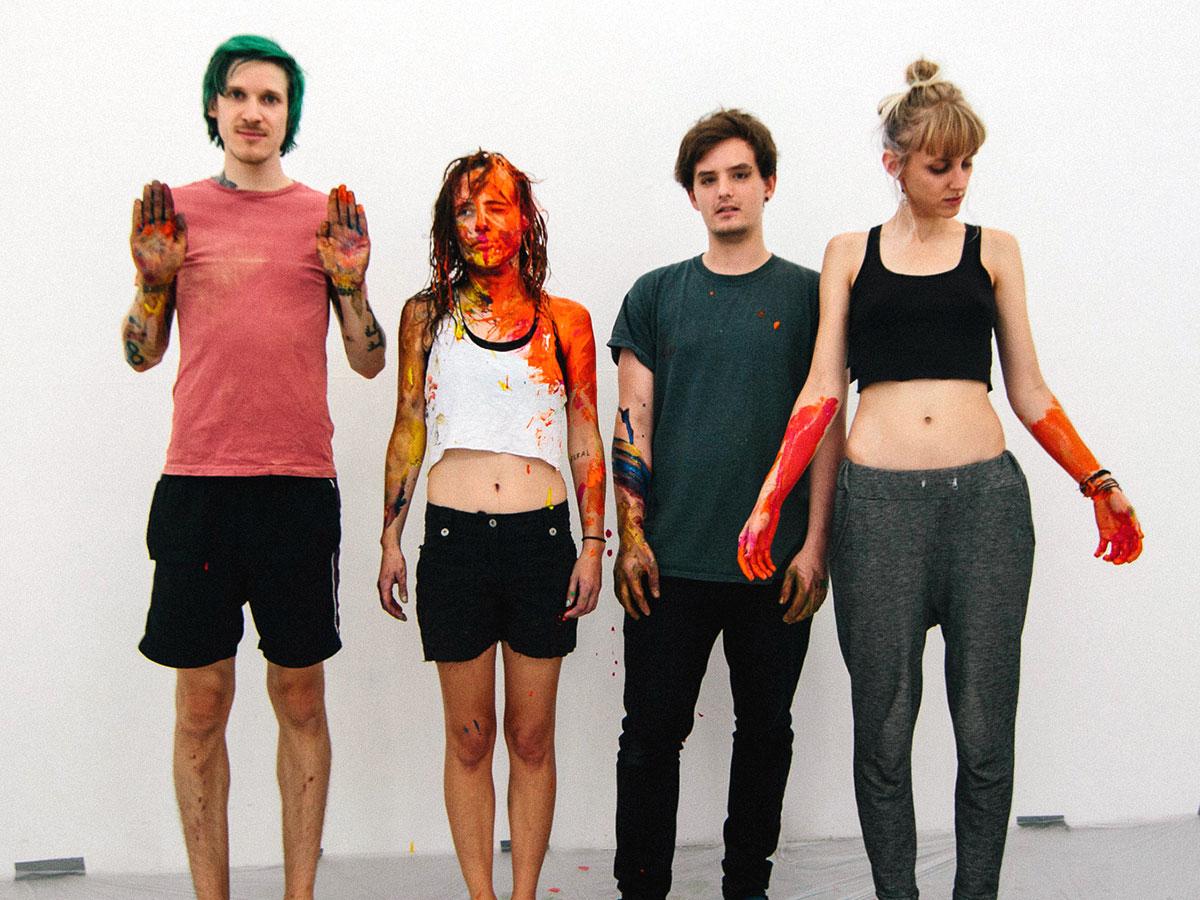 At Groezrock we say down with Ren, Joe and Liepa from Petrol Girls to discuss their audience, sexual violence and, as always, who would play them in a Hollywood movie about the band.

Ren [Vox]: Hanging in there, just about.

We’re here at Groezrock, how’s everything been for you so far?

Joe [Guitar]: We were told it was going to be cold too, but it’s not

Liepa [Bass]: We saw the memes of Arctic camping!

Have you managed to check anyone out yet?

R: I just went and watched a bit of The Menzingers and ducked out of our load out to see some songs.

L: I saw Toy Guitar. They were amazing.

R: I saw a bit of Cocaine Piss, that was cool, I really liked it.

During your set you played a couple of samples before Touch Me Again with people speaking about experiences of sexual violence at gigs and festivals, and then after the song that you pointed out that some guys were being really ‘laddish’ in the audience during that song. How does that even happen?

R: It blows my fucking mind. I don’t understand. We had to stop the song a couple of days ago. I don’t mind people dancing, that’s totally fine, but when guys are getting really fucking bro in a pit, it’s like ‘do you just not understand?’ Of course, I know sexual violence affects any gender, but it’s overwhelmingly men on women so for a load of guys to get super bro in a pit during that song, I just had to stop them and ask if they understood the irony of doing that during this song?

L: And pushing away women from the front as well

R: Often in punk a lot of positive politics are put forward from the stage but you have to back that up, and when you can you really have to demand that your audience respect it. If you’re talking about sexual politics and guys are getting really bro in the pit you can’t can’t just leave it, can you?

Of course! So does that have an effect on the way you approach your live show? For example, when you’re playing a show in York for Henry, you’re playing to maybe 40 or so like minded people, whereas you come to Groezrock and it’s a very different crowd…

R: BROezrock! I think I’m mindful of the context that we play in. I think sometimes I’m to judgmental about it. I try to suss out the situation each time and adjust what I say onstage accordingly. We play a lot of shows in this mega feminist bubble so there I kinda assume a certain level of knowledge. When we play outside of the bubble I try to not assume that and try to take it right back down to basics – like don’t try to fuck people when they’re sleeping – but that’s still worth repeating in the bubble.

L: Also, there are people who have a process after shows where they come up and say “we had such a good time, we really like your band, we danced so much, and we looked up the lyrics maybe for the first time ever we’re seeing these things.” We want people who don’t understand this entirely to still be able to enjoy our set, so there’s a fine line that’s very specific to each show. It kinda sucks that they have to exist though…

R: It does. It really fucking sucks. I guess it’s also worth pointing out that non-binary and trans people are also affected by sexual violence, as are men, but it’s overwhelmingly men that are doing the sexual violence. It fucking sucks, but it’s at all levels within our punk rock community. People in bands perpetuate sexual violence as well, it’s at all levels. It’s a community problem that you really need to think about. Punk rock is meant to be a political community, somewhere that we can really build something and then move out from. So much of my personal energy at the minute goes into making punk rock a safer place from sexual violence. I want to be doing more stuff with migrants and anti fascism, there’s so much shit going on, but our scene lets us down and disappoints us time and time again.

Petrol Girls do spend a lot of time promoting your message, but there are a lot of bands out there who don’t necessarily have a message to promote. How important is it to find a balance between having bands such as yourselves who do have a strong message and also having the bands out there who are purely about fun, and can almost create a place for escapism from all of life’s problems?

R: I think people need to take responsibility for their platform. People need to understand that having a microphone and a stage is a massive opportunity. I’m not going to rip into any women, non-binary or trans people who take the stage and do what ever they want with it because it’s hard for those people to take the stage, and people of colour in the punk rock community as well, I’m not going to rip into any of those people for taking the stage and doing whatever they want, but there’s a lot of all white dude bands that spout some fucking pointless shit. What do you really care about, mate? Maybe you should think about making some space for people who actually have something to say!

J: I think it’s fine if a band doesn’t have something to say. Music isn’t always about literal meaning. It’s kind of frustrating though when bands use politics just to get punk points. If you don’t really have anything to say but you love music and just want to make music, that’s fine. Just be honest with that. It’s more frustrating when bands use really shallow politics as a sales point.

L: It’s hard to judge. We all listen to bands that don’t have political affiliation, some of them don’t even have lyrics. Just compositions. My only cut off point is if artists are actively fascist or misogynist. I used to be able to ignore it and just listen to the aesthetics of the music, but now I’ve grown up it’s become entrenched in my life. I can’t look past the politics of the people who are creating it.

You guys are on tour a lot playing with loads of great underground bands that people might not be aware of. Who should we be checking out?

R: The Exhausts. Those are the big ones. Werecats! It’s really hard when you spring that on us!

L: You tend to remember the more recent shows and bands that you’ve played with.

A fun one to end on – Hollywood calls, they’re making Petrol Girls: The Movie and you’re in charge of casting. Who is in the band?

R: Is it Winona Ryder that’s in the Alien films? I want her! She’s cool!

R: We always have to add in a bit about consent. It’s always worth saying again. If someone says no, it means no!