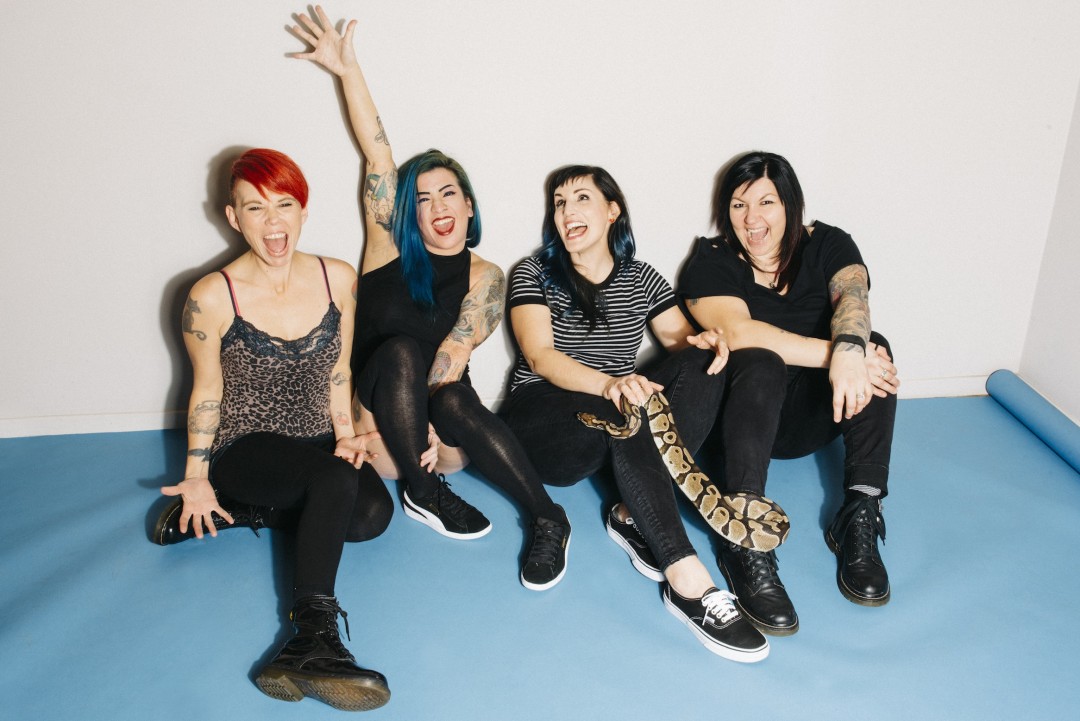 At Jera On Air Festival, we caught up with Bad Cop / Bad Cop guitarists and vocalists Jennie and Stacey to talk about the state of the world, playing punk rock festivals and, as always, who would star in a Hollywood movie about their band…

Hey Stacey and Jennie! You just played a great show at Jera On Air, how was it for you?

S: Incredible. It was so much fun. Thanks to everyone for coming!

J: It was probably the most fun show of the whole tour for us.

What are your first impressions of the festival? Is it your first time here?

S: We got in at 3 and we have to leave really soon, so it’s been short. But everyone has been really great to us, the crowd was amazing. I watched a bit of PO Box and A Wilhelm Scream, who were amazing.

You’ve also been doing the Punk In Drublic shows, how have they been? It’s good to see NOFX still playing the European leg…

S: It’s always great playing with them. We’re having the best summer of our lives. We’re really grateful for that.

At festivals like this one, there are always so many great bands lower down the line-up that people might not know – are there any bands that have caught your eye that we should be checking out?

S: Spoilers are one of my favourite bands. I’m trying to get [Fat] Mike to listen to it. The Bombpops. Lone Wolf. Starving Wolves, they’re amazing. There are so many. We’re just starting to realise now that we’re stepping up out of that group, we’re looking around and people actually know who we are, which is cool.

Especially now that you’re playing to more and more people, how important do you think it is to use your platform to speak out and really put across the things that you believe in?

J: It’s super important. If you knew that people were listening to you, why wouldn’t you say something at least kind. On the Warped Tour last summer there were a lot of bands that were total nihilists. Capitalist, nihilist, just ‘fuck everything and buy our merch’ – it’s super gross.

On the other side of the coin, there could also be the argument that there’s a place for bands who are using their half an hour onstage to create a space that’s an escape from all of the troubles of the outside world…

J: We believe that you can have fun and say something important at the same time.

J: The two things don’t have to be mutually exclusive.

S: We’re the antithesis of that, because we like to have fun, but the lyrics are important.

Exactly – my favourite live band is Anti Flag who’re the most fun, but also one of the most political.

S: Yeah! Justin and I were texting today, we were both saying how we’d like to do a tour together. It would be great, but you also have to diversify with your support because it increases new fans. But we should do something together because it’s important, with the way that the world is right now.

S: We can’t believe it. We’re here in Europe, so there’s not really anything we can do apart from talk to people here about it

J: Europe has it’s problematic leaders too. No one as dramatic and ridiculous as Donald Trump, but there’s a shift towards neo-liberalism and self serving, and a lack of respect towards others. Somehow the lack of resources is the fault of poor people? I’m sorry, it’s the fault of rich people.

J: It breaks my heart to hear what some of the people believe right now, and I understand that it comes from having a lack of resources and they’re angry, and someone told them that it comes from these immigrants, and people that are not like us somehow. If those people could find something positive, it would change.

S: I don’t want to like in a homogenised white world. That’s bullshit. I grew up in a trailer park, my neighbours across the street were undocumented workers, and they’re the same as I am. They’re no different. I feel like it’s something that we need to go home and fight for. California is actually a pretty good place because we’re not letting that stuff happen, but I feel we need to go out and do more.

Bringing things round to the music scene a little bit, there have been a lot of stories about the behaviour of certain bands using their platform to essentially treat women however they want – as women in the industry you’ve probably seen more of it than a lot of others – and there’s also stories of women generally being treated differently to the men overall…

J: We’ve been ok, but we’ve heard terrible things from other women though.

S: We haven’t had the hardest time. We’re actually doing pretty good. We could try and fight for a better slot, or more money, but we’re also a new band. We’re lucky to even be on the bill. But I do know that a lot of women have had a really difficult time in this industry.

How important do you think it is that other bands, especially male bands, use their platform to raise awareness of this kind of thing?

J: It’s hugely important. Do you know the band Clowns? We love them, and they use their platform for that. Like when we were just talking about undocumented people in the US, I was born there and I feel lucky that I don’t have to legitimise my existence to my government. People need to understand that everybody is everybody. If you poison this reservoir, you’re drinking it later.

S: We have to fight, or they will keep taking from us. They’ll put all women who’ve had abortions in prison for their rest of their lives. Could you imagine? I would go down fighting for my life with an axe in that situation! It makes me so mad that anyone would think that another human life isn’t just as important as their own. It’s intolerable.

People reading this might interpret this as quite a strong message, but all I’m hearing is basic human decency…

S: It makes me want to cry.

J: I feel sick when I talk to people think that they can remain impartial when totally unjust things are happening. They say ‘Oh I don’t get involved with politics.’ This isn’t politics. This is asking whether you think this is ok or not. If you don’t think you need to get involved then that means that everything is going pretty good for you, and you would literally look out of your own window and watch someone drowning and think ‘I’ll just stay here because I’m not wet.’

S: There’s also something to be said for remaining positive because on a one to one basis we can change things. So we have to stay positive through this.

J: Positivity and love is the only way we can get out of that kind of stuff.

S: We have to not be jealous of of neighbour. We have to not be keeping up with the Jones’, we have to be ok with who and what we are. Here’s a big fucking thing: every human being on this planet needs to go and do what they are supposed to do. That’s when you’ll be happy. When you’re forced to do something you’re not supposed to do, you’re going to be miserable for the rest of your life. That’s what’s happened to this world. I’ve lived so many lives. I’m 42 years old and I’m getting to do this now. I’ve been married. I’ve been divorced. Rich, poor, drug addict, sober, everything. It’s been wild!

Just a silly question to end on then – Hollywood calls, they’re making Bad Cop / Bad Cop: The Movie and you’re in charge of casting. Sho stars as the band?

S: Kristen Wiig for me.

S: Who could be you? Catherine Zeta Jones? Jennifer Love Hewitt?

J: Linh would be the Domino from Deadpool 2. Who could Myra be? Someone sassy…

S: Juliette Lewis could just play all of us!