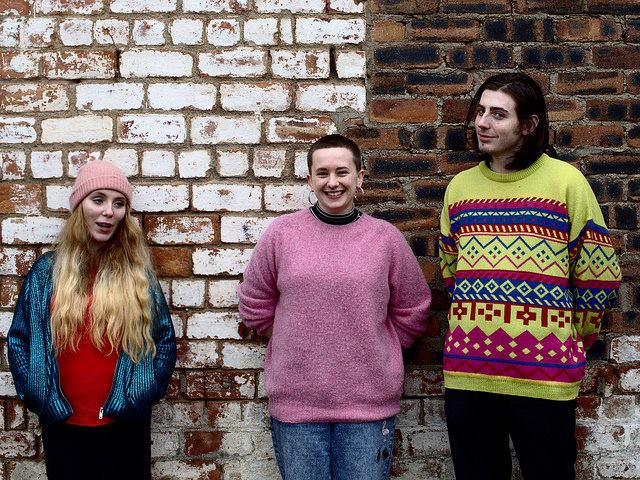 Debut album Eurgh! from Glaswegian DIY garage rock band Breakfast Muff was written in the highlands of Scotland over a 96 hour period. This is somewhat apparent as the album features no track over 3 minutes, and several tracks under 2. This actually becomes a strength of Eurgh! as a whole, as the album feels tight and well controlled with no self-indulgence. Each song introduces itself, says its piece, and then moves along.

Stylistically Breakfast Muff refer to themselves as “Hole but funnier”, while they have a lot of the late 80’s early 90’s alt-rock/grunge edge, it seems easier to equate them closer to bands such as The Pixies. Especially in “Raspberry Pavlova” where band member Simom channels his inner Francis Black, emulating his eccentric off rhythm wailing. The album has a wonderful use of catchy yet off-kilter melody, seemingly purposeful out of tune singing adds a lot of character, and a sneering attitude, to the overall mood of the album.

This attitude plays really well in tracks like “R U a Feminist” where the lyrics portray an acquaintance (perhaps boyfriend) who calls himself a feminist while acting psychologically and physically abusive towards the singer. “You’re not a fucking feminist/If you don’t act with kindness/If you treat women with violence/You’re not a fucking feminist”. Also in the song baby boomers, where the lyrics take on the critiques towards the bands generation while taking shots at the baby boomer generation “Sorry we’re fucked up/but you made us this way/we are all grown up/you used us as your ashtray”. Whether it is about sexual liberation such as on “I Like To” or more general social commentary like on ending track “A Waving Cat”, this album does pulls no punches maintaining a good level of lyrical substance, and, while taking on such heavy topics, it does so with a smirking grin and a witty charm that eases on the weight of the topic while not lessening any of its impact.

The 3 piece share vocal duties on Eurgh! to great effect, songs such as “Duvet” and “Magic Carpet” weave interesting and ear catching melody by utilising harmony in a very distinct way, each singer adding their own flair and character to the melody. While tracks such as “R U A Feminist”, “Baby Boomers” and “Feast” use a more gang vocal style to generate a more aggressive and frantic feel.

The album moves along quickly but is very well paced and is overall a very enjoyable listen, the only issue is that opening track “Lunch Money” is unappealing. It is a simple 50 second song that joins together simple rhythmic shouting, followed by jangling chords, and repeat. It came off as abrasive, and a little pointless, while it could be an attempt to open with some confrontation, it is not hard to imagine people not making it past this track and dismissing the rest of the album, and doesn’t really set the tone for the rest of the album.

However I would recommend checking out this album if you are a fan of hearing some interesting, and incredibly catchy alternative rock music with a low-fi feel and dripping in attitude. Just get through the first track and you are golden.