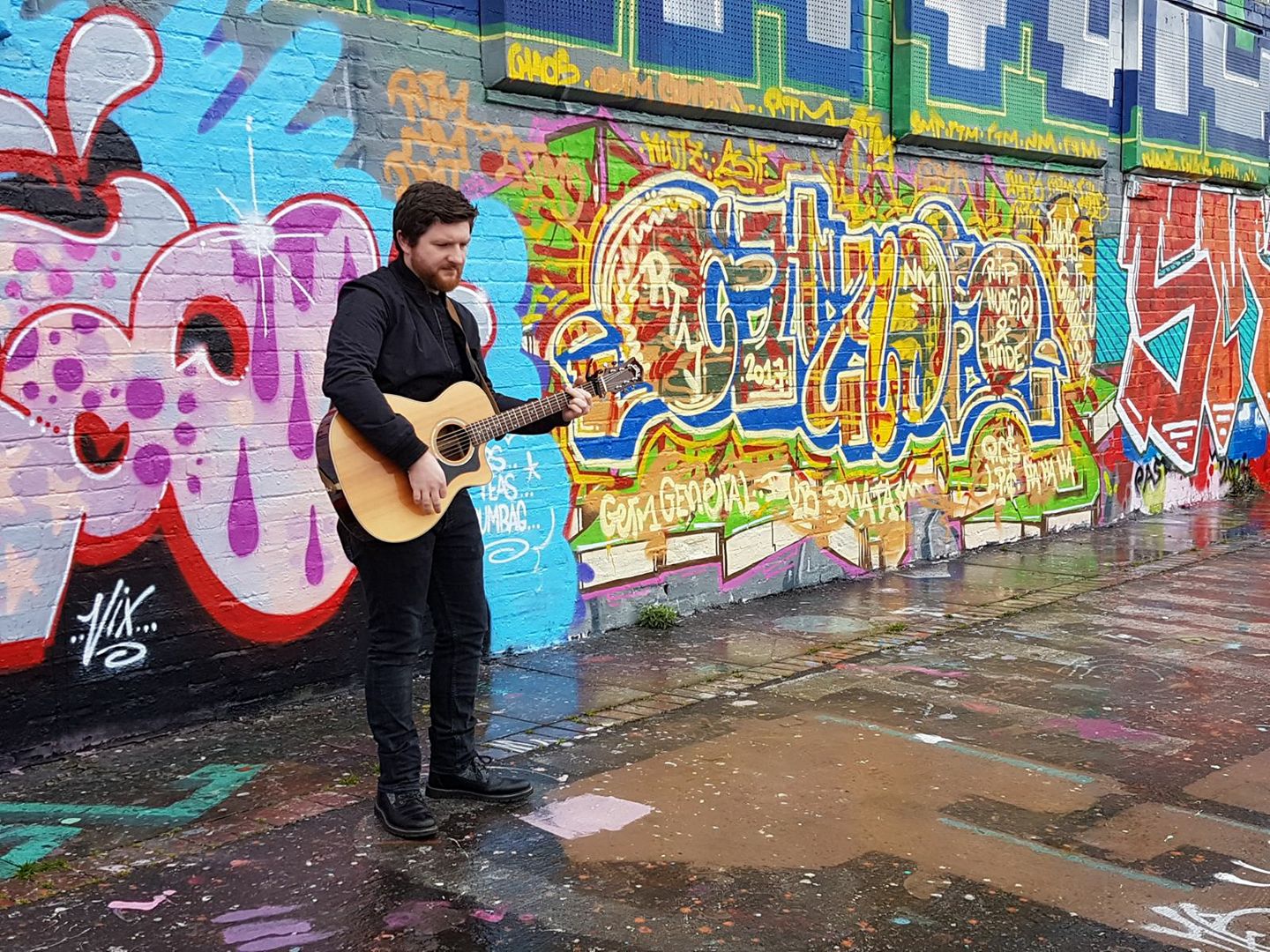 As part of our ongoing preview of Manchester Punk Festival, we caught up with Enda McCallan who is opening the acoustic stage on the Friday to discuss the event, his upcoming EP release and, as always, who would star in a Hollywood movie about his life…

Hello Enda! How the hell are you?

Hey. I’m great, thanks for asking! It’s a pleasure to have the chance to talk to you.

For anyone unfamiliar with your music, could you tell us a little bit about your sound, influences etc?

Sure thing! I’m an acoustic singer-songwriter, playing songs that are heavily tinged in Americana and country music. As well as punk influences such as Gaslight Anthem, Menzingers or Lucero, there are elements of classic rock influences of Springsteen, Bob Dylan, Tom Petty, with a spatter of Waylon Jennings or Willie Nelson in there. I guess it sounds like an odd mix of influences really?

We heard that you might have a new EP coming soon. When can we expect that?

I do indeed! I’m still finalising some things to do with the release, but I’m hoping to get it out in the first half of the year. I approached this EP as if it could be the only music ever put out (I hope it’s not!). With that in mind, I wanted to get the most out of the songs as possible. It’s a full band EP, and a lot louder than I had expect. I’m really excited for people to hear it. The country influence is strong throughout; lots of classic tele tones and songs of heartbreak!

You’re also playing at Manchester Punk Festival in April. Firstly, being based in Manchester, you must already have some fond memories of the festival?

I sure do! It’s such an amazing festival, and it has been wonderful watching it grow over the past few years! I have some wonderful memories from each year, from Paint it Black tearing up Gorilla last year, or discovering TNS newbies Matilda’s Scoundrels as I wandered lost through Sound Control, or to the more bizarre sight of Mr Blobby’s guest appearance with Revenge of The Psychotronic man! Regardless of who’s playing though, there is a fantastic sense of community and camaraderie throughout the festival. The guys who organise it do a great job. As a fan, I look forward to MPF every year, and I’m really honoured to be on the lineup this year.

When and where can we find you playing this year, and what can we expect from your set?

I’ll be opening up the acoustic stage on the Friday, 4pm in Underdog. You can expect a very excited singer songwriter playing songs of heartbreak and love, politics and angst!

The line-up is incredible this year – who are you looking forward to seeing?

It’s incredible, isn’t it? There are so many acts I’m excited to see. Obviously, Propagandhi and Iron Chic! I’ve heard great things about Sam Russo’s full band so I am really looking forward to catching them live. Fellow Irishmen Chewing on Tinfoil are fantastic, I’m glad they are on this year! Arms & Hearts is always a pleasure to hear, I’ve shared many line-up’s with him and he’s always brilliant. I’m also looking forward to discovering some new artists.

As a DIY musician, you get to share the stage with so much undiscovered talent. Who should we be checking out?

I’ve shared the stage with so many talented and passionate people, and there’s so much talent out there, especially in the acoustic scene. Adam Carpenter is a great songwriter who has recently finished recording his debut album. Chloe Hawes writes songs that will bring you to your knees! She has a unique voice and her songs tell incredible stories. Oli Ng is a songwriter from Crewe, and is one of the most talented and hardworking musicians I know. He wears his Springsteen influences on this sleeve, and that’s no bad thing! Finally, my brother Aarron McCallan is in the same game, and has been touring Ireland and the UK with some beautiful songs.

Hollywood calls, they’re making ‘Enda McCallan: The Movie’ and you’re in charge of casting. Who plays you?

Haha, I’m guessing they are out of ideas if they are making that movie! My ego would love to say Tom Hardy or someone like that, but I’d be fooling myself! Honestly… I have no idea!

I’d just like to thank your readers for taking the time to read and get to know me! I’ve been a little quiet on the gigging front for the past while, but there will be plenty of opportunities to catch me this year, so I hope to see lots of faces, either at MPF in April around the country afterwards!