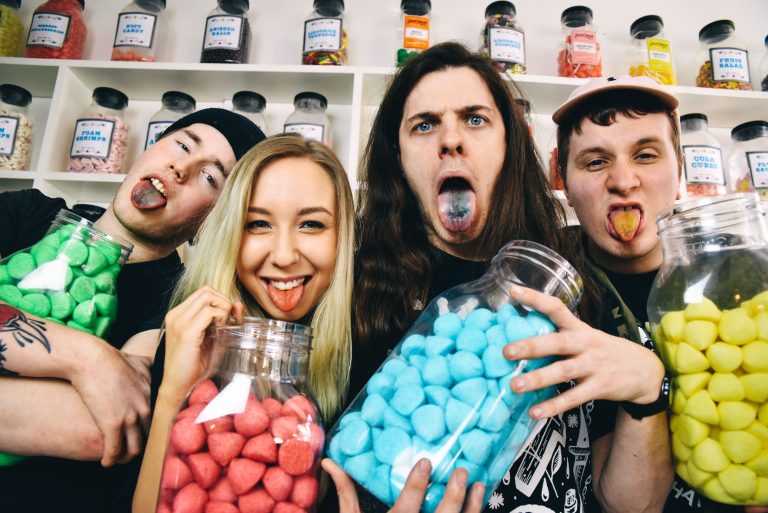 Milk Teeth’s third EP, Be Nice, follows a change in the band line-up, guitarist and second vocalist Josh Bannister departed from the band last year and has been replaced with Billy Hatton. This is the first time he is featured on record with the band, although he has been touring with the band for the last few months, therefore it is interesting to hear the influence he has on this record. Since the EP is four songs long, I will review each song individually.

Opening track “Owning Your Okayness” is also the lead single off of Be Nice. The song received some flak upon release, as it was seen as a pop departure from some of Milk Teeth’s earlier more grungy work. Although I feel some of that, this is an incredibly solid bit of song writing. It feels like a song that is entirely comprised of hooks, the guitar line, the vocals, the drum fills. The band I would most compare this song to is Weezer, for the level of pure hooks and catchiness in a garage music style.

Second track “Prism” has a much different, darker feel. The verse is comprised of a driving off beat drum pattern accompanied by an incredibly fuzzy, rattling bass tone. The most impressive part of this track is the interesting subtle guitar work, the background of the song is filled with unnerving bends and ambient effect work, echoing of Sonic Youth. The song is somewhat a diss track, with lyrics like “Your fading into the background, you compensate by spitting poison out of your mouth”. Lyrically its fine, but the vocals carry a lovely edge to them that allow just enough of the disdain to come through and give the lyrics an extra push. The only issue I have with the song is that the intro to the song carries very little weight, it opens with a very simple guitar line and when the rest of the band comes in it just doesn’t hit you in the chest like you would hope.

“Fight Skirt” is a much more forward track, with a more punk feel. Again we hear some beautiful atmospheric guitar work in the verse, with some pounding rhythms and intricate drum fills. Vocally lead singer Becky lends the song a lot of character with attitude filled verses, however for me the star of this song is new second vocalist Billy Hutton. His voice adds a shot of frantic energy to the chorus, and a dripping level of pure sneer over the slower bridge is beautiful. The song’s ending coming out of the bridge is incredible and plays on this more aggressive feel very well, the double time drum pattern only increasing the energy of the song until it comes to an abrupt yet satisfying end. It’s nice to hear that Billy Hutton can perform a similar, yet distinct, role in Milk Teeth as previous second vocalist Josh Bannister, as the mix of two vocalists was one of the band’s strengths so anyway that dynamic can be retained is welcome.

Finally the EP ends with “Hibernate”, a slower, moodier track that moves into a mighty crescendo. During its slower section Becky shows us an emotive low tone similar to that found on previous track “Kabuki” from album Vile Child. The lyrics seemingly reflect on the nature of having a dream, but pursuing it can leave an impact on the rest of your life. The second verse specifically deals with romantic relationships, “Oh emotionally I’ll shut myself down, Love wasn’t enough to stop me travelling around”. The guitar is the driving musical accompaniment for much of this song, as the movement from one section of the song to another are marked by a change in guitar effect. Opening with a thin and soft reverb heavy sound, moving into a sharper jangly tone over top of a finger picked acoustic, then adding subtle back ground distorted effects until moving into the big rock crescendo. The big final crescendo is opened with Billy once again adding a lot of aggression to the song by screaming “Don’t let me fuck this up”, followed by a heavier version of the chorus with the two harmonising magnificently.

If the idea of this EP was to explore new ideas after a line-up change then I’d say mission accomplished, not only are all 4 of the songs on Be Nice of high quality but they are each quite unique without losing any of the bands characteristic garage rock style. While not as grunge feeling as their previous album, it is definitely not edgeless and Milk Teeth continue to impress with their knack for consistent, memorable song writing.