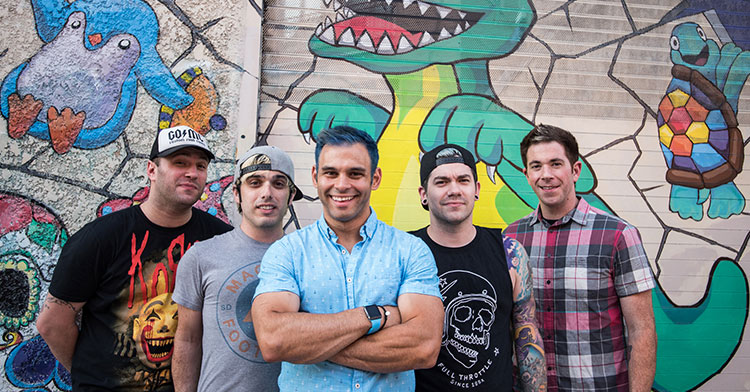 On 21st April, The Key Club in Leeds played host to one of the most upbeat, fun bands around, Patent Pending, and with tickets sold out weeks in advance, this was certain to be a great show.

On first and getting the crowd warmed up were Sheffield pop-punks Sweet Little Machine. Their infectious brand of bouncy, hook-laden pop punk did a fine job of setting the tone for the evening, with the song War being a particular highlight. Based on this showing, they’re a band with a bright future and I’d recommend checking them out in a small venue while you still can!

Next up were Eternal Boy, a pop-punk band from Pittsburgh PA. They continued with the theme of upbeat, bouncy pop punk, but there was something a little different about this band. The new wave of pop-punk is great, but let’s face it, pop-punk was at it’s best in 2003. Fortunately, Eternal Boy have bottled up the sound from that era, drawing influence from the likes of Allister and Homegrown, and have developed a sound that would have seen them become one of the biggest bands on the scene if they’d have just been around 15 years ago. This is pop-punk for people in their late twenties and early thirties, and it’s great. The majority of the crowd loved every second of it, and a Blink 182 cover sweetened the deal for anyone still on the fence. Go and listen to this band immediately.

Finally, the reason we were all there. Patent Pending. As I said at the start, Patent Pending are one of the most fun, upbeat and entertaining live bands around, and this show was a fine example of that. From front to back, the sold out Key Club crowd didn’t stop bouncing for the whole set.

Particular attention has to be drawn to frontman Joe Ragosta. I can only think of one other frontperson that I’ve seen work a crowd so well. Every second, whether mid song, speaking between or crowdsurfing around the venue, the audience is lapping it up. This man is one hell of a showman!

They blasted through fan favourites ‘Classic You’ (which featured one of the best Billie Joe Armstrong impressions you’ll ever witness), ‘Brighter’ and ‘The Whiskey, The Liar, The Thief’, as well as their cover of ‘Spice Up Your Life’, and took part in their usual crowd surfing Olympics, this time seeing Joe lose to the drummer from Sweet Little Machine.

All in all, this was an incredible show by a band on top form. Why Patent Pending are only playing rooms this size is baffling. Go and see them as soon as you can!