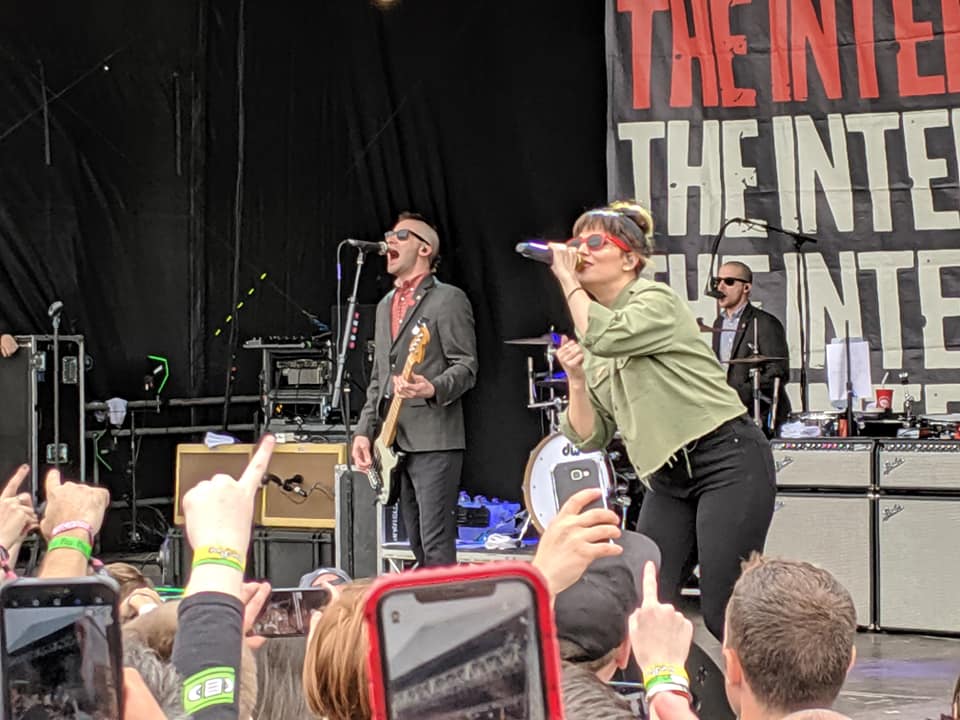 Every year, we look forward to the end of May and Slam Dunk Festival. Just down the road from us in Leeds, and usually at a bargain price, the one day festival is always one of the highlights of the year. We first went to Slam Dunk Festival in it’s third year, in 2008, and have only missed one year since.

Despite our regular attendance and how much love we have for the event, as it’s grown year by year, there has always been something to complain about. It’s usually the queueing system that they don’t quite get right, be that at the bars, for the toilets or trying to actually get to a stage to see the band you want to see. With this being the first year at the new site at Temple Newsam, we arrived as early as possible fully expecting one or two teething problems, so we wanted to be near the front of the line. Last year, despite getting our wristbands the day before, we still missed an entire band queueing to get in. This year, we managed to walk straight into what was called the Festival Village without a queue, so straight away that was one plus. The only slight negative was that we couldn’t get a drink as soon as we arrived as the bar wasn’t open yet. The beers were flowing by 10am, but it’d have been nice to be able to get a soft drink of a coffee in that first hour. That’s as bad as it got though, and it’s hardly a major issue. So well done Slam Dunk on absolutely nailing the organisation side of it. Absolutely everything ran smoothly all day, which is just great.

So, moving onto the music. We started our day at the Punk In Drublic stage with The Bombpops. They hit the stage a little before mid day and did a solid job of warming up the crowd for the day to come. The sun was out, everyone was feeling fresh and despite the crowd perhaps still saving their energy for later in the day, the band’s summery pop-punk singalong anthems hit the right spot. CA in July was a particular highlight, and we’d love to see The Bombpops come back next year and play a little higher up the line-up, when the audience have let loose a little more.

Next up on the Punk In Drublic stage were our favourite band, Anti Flag. We’ve made no secret of the fact that we believe them to be the greatest live punk rock band on the planet, and their appearance at Slam Dunk, our 21st Anti Flag show, did little to change our minds. Fan favourites Broken Bones, The Press Corpse and This Is The End were great fun, but it’s the set closer, Brandenburg Gate, which finished with the drums in the middle of the crowd, which really stood out as the finest moment. Their positive message of looking out for each other was a constant throughout, and Chris #2 exclaiming “May the milkshakes forever reign (rain?) over fascists” was a good laugh. 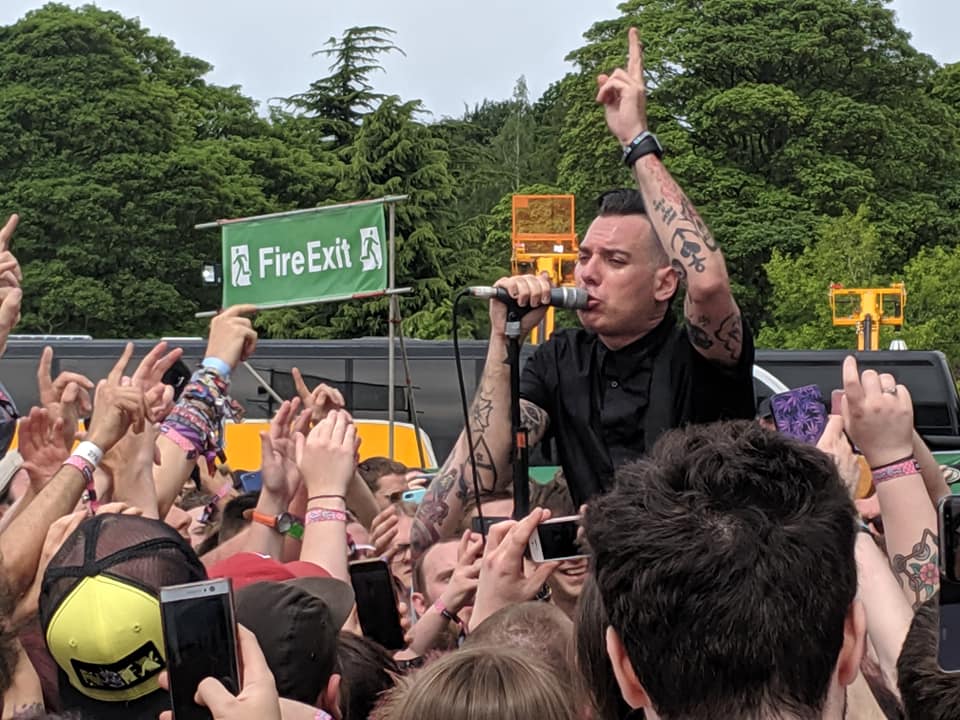 Following on from our favourite punk rock band, we headed to The Key Club Stage so see if the rumours about the secret band were true – and they were. Busted took to the stage to a capacity crowd in the tent and played a thirty minute set packed with their biggest hits including Air Hostess, Crashed The Wedding and Year 3000. It was silly fun, and while we wouldn’t usually go out of our way to see them, on this occasion, it was a great idea.

If we were really pressed to pick a highlight of the day it would probably be The Interrupters, who showed the huge crowd at the Punk In Drublic stage why they’re one of the fastest growing ska-punk bands in the world right now. From the moment that opener, A Friend Like Me kicked in, right through to the end of closer, Family, the energy didn’t let up. Ska is one of the most fun genres in the live arena, and when it’s executed as perfectly as this it’s hard not to have the best time, especially when the sun is shining.

Unfortunately, the sun didn’t stay out much past the end of The Interrupters and by the time we’d picked a spot ready to watch Simple Plan on the Monster Energy Stage, the clouds had gathered and rain was threatening. That didn’t stop the Canadian pop-punkers delivering an absolutely incredible set packed full of hits from their twenty year back catalogue. I’d Do Anything, Addicted and I’m Just A Kid sound just as fresh as they did way back when, but it was Boom, from their most recent album that stood out as the finest moment, although the acoustic closer Perfect was also pretty special. Simple Plan have had a successful career as a band and play to huge crowds around the world, but when they can put on shows like they did at Slam Dunk, the fact that they’re not as big as bands like blink-182 will forever remain a mystery. 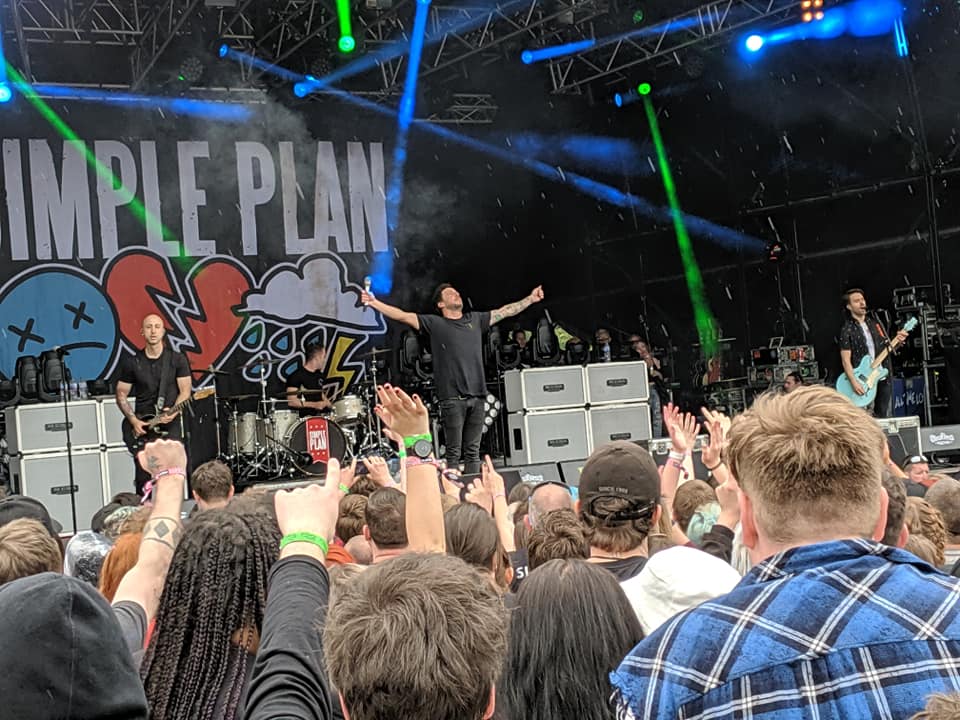 The rain was really coming down when we headed over to the acoustic stage to see Rob Lynch, and with the stage itself being open air there was quite a puddle beginning to form around the equipment. Combine the weather with the fact that you could hear the drums from The Get Up Kids over on the Dickies stage quite clearly and most solo acoustic performers would crumble under the pressure. Rob Lynch though, took it all in his stride. Rattling through a good humoured set which concluded with a big, damp singalong to My Friends & I, it’s fair to say that this was a set unlike any other show that Rob has ever played, and it’s one that the audience who braved the elements won’t forget any time soon.

Less Than Jake are a seasoned festival band so a little (actually, a lot of) rain didn’t phase them. Their career spanning setlist which included She’s Gonna Break Soon, Nervous In The Alley and Johnny Quest Thinks We’re Sellouts kept the now soaked crowd moving, and not caring in the slightest about the rain.

Fortunately, the next thing on our list involved getting out of the rain for a bit as we headed into The Key Club stage to check out Lights, who we were completely blown away by. Savage sounded absolutely huge, but the main thing that stood out was just how much of an incredible singer Lights is. Her voice sounds great on record, but we assumed that part of that was down to studio production. We couldn’t have been more wrong, and we probably witnessed the most powerful vocal performance of the day. Lights really does have it all – massive sounding songs, a phenomenal voice and loads of energy onstage. We’ll definitely be keeping an eye out for her next tour! 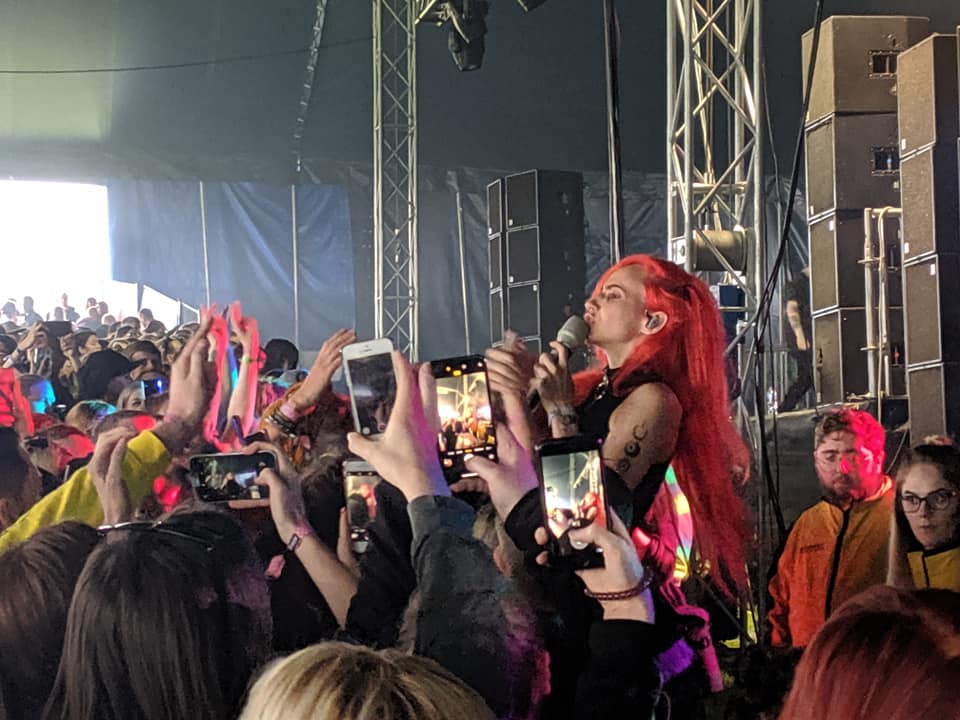 During our brief respite at The Key Club stage the rain had upped it’s game. It was coming down pretty heavy when we headed over to the Monster Energy Stage for New Found Glory. Mixing up some of their more popular covers, including Kiss Me and The Power Of Love with some of their biggest hits such as Dressed To Kill, Hit or Miss and My Friends Over You, they did their very best to keep the energy up, but they were really up against it. Fans that were down at the front made the most of it, but we found ourselves by the sound desk surrounded by drenched, grumpy looking folk who’d had just about enough of the rain.

As the rain finally started to ease off we headed up the hill to The Dickies stage ready for The Menzingers, who were another one of the highlights of the day. They’re a band with a catalogue full of big singalong choruses so it’s no surprise that they’ve stepped up to headlining stages at festivals. Songs from After The Party went down the best, with Thick As Thieves being a stand out.

Back at the Punk In Public Stage, it wasn’t the best showing from headliners NOFX. We’ve championed their live show for a number of years, defending them against may of their critics when it comes to their somewhat risqué stage banter, but there’s little we can say to paint their performance in a positive light this time. We’ve seen them play sloppy, poorly executed songs in the past, but there’s always been something about their show which has carried it – the jokes. Unfortunately, the humour was lacking this time as well, so they just came across as a really draining, poor band. It was an off night. We’ll see them again because we know what they’re capable of, but we can pretty much guarantee that if anyone saw them for the first time here, it’ll no doubt be the last.

We headed off from NOFX’s disappointing set a little early and caught the last three songs from All Time Low. Kids In The Dark, Lost In Stereo and Dear Maria Count Me In are some of the catchiest pop-punk songs out there, so finishing Slam Dunk Festival 2019 with these songs was a fitting end to another great event.