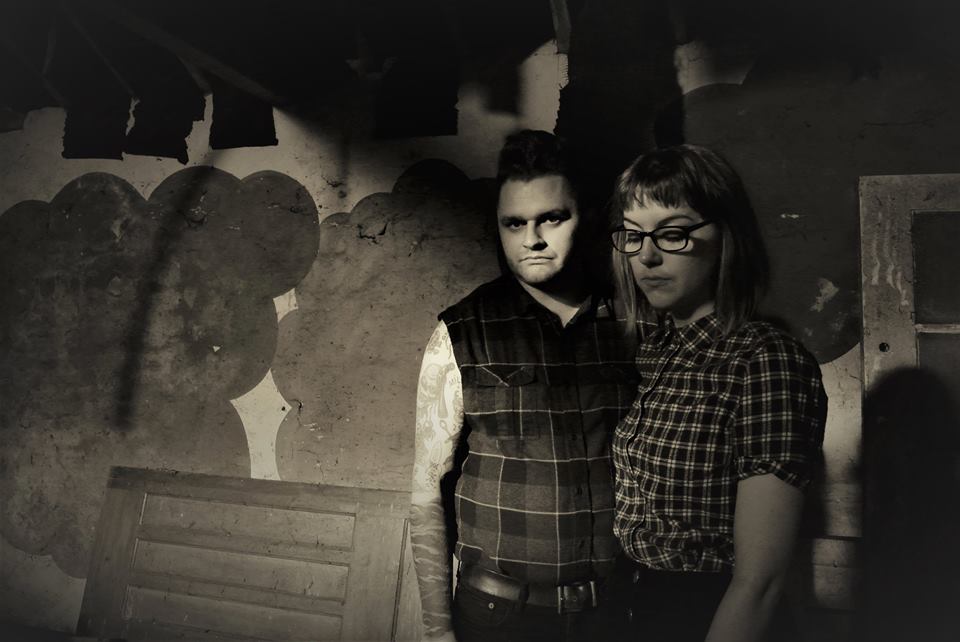 We were so impressed with Snakerattlers debut album that we sat down with singer Dan to find out a bit more about the band, the album and what the rest of 2017 has in store for the York based rattlerock duo…

Hello! How the hell are you?

For those not yet familiar with Snakerattlers, can you give us a little overview of what it’s all about?

Snakerattlers is an addiction. We are addicted to it’s rock and roll. It’s also about me and Naomi doing as many gigs as we can. We love the music we create together and love the fact that it’s only us two making it. We don’t need a band. We are the band. Snakerattlers is about driving round the country together in our little van, spending our time together doing what we love best. The music we create involves literally every influence we’ve ever had to do with music. We didn’t realise this when we were making it, but we do now. It’s musical core is dark rockabilly, but it’s got bits of punk, rock and roll, psychobilly, doo wop, surf, sludgecore, noisecore, and even a bit of country. We both feel that all the bands we have been in together in the past were leading up to this one. Snakerattlers will now always be a thing.

You’ve just dropped your debut album, This Is Rattlerock, via Moon Skull Records, how does it feel to be able to finally unleash it on the world?

It feels good. I personally hate making records, so when they are done I feel quite relieved. I get all grumpy when we’re recording, as we tend to record live and I make A LOT of mistakes. The best thing about the debut album is that we absolutely found the right label to release it through. We knew if we waited, we had a few offers in the very early days, we’d get the right deal. Moon Skull is a small label, but it promotes our exact brand of dark rock and roll. It’s always a good idea to be on a label that represents you properly. It was nice to be asked by them too. Chasing labels is always a pain in the arse.

Now that the album is out there, what does the second half of 2017 hold for Snakerattlers?

Gigs, gigs and more gigs. Check out our website. We’ve got a lot booked. We are also talking to a German label at the moment about releasing a 7″ vinyl in December. So we might have to, reluctantly on my part, do another recording session.

As an underground band, you regularly play alongside loads of great bands that people might not be aware of – who should we be checking out?

Oh God, Craig, I can’t possibly answer this. There’s far too many decent bands out there. There’s a lot of shit too. One sure fire way to see decent bands is to attend our regular Behind The White Door events at The Fulford Arms in York. We do two a month and have 4 bands on each show. We only pick the best of the best.

With Behind The White Door you’ve carved a reputation as one of the better regular gig nights not only in York, but further afield too. How did you achieve that?

Nice to know you think that! Thanks! We built up the Behind The White Door name in the same way we built up Snakerattlers – hard work, digging our heels in and never giving up. At first, bands played to me, Nelly and Naomi. We’ve got a nice regular following now and December this year will see the 100th Behind The White Door show. So we must be doing something right.

Hollywood calls, they’re making Snakerattlers: The Movie. You’re in charge of casting. Who plays the band?

Drugs are for losers.