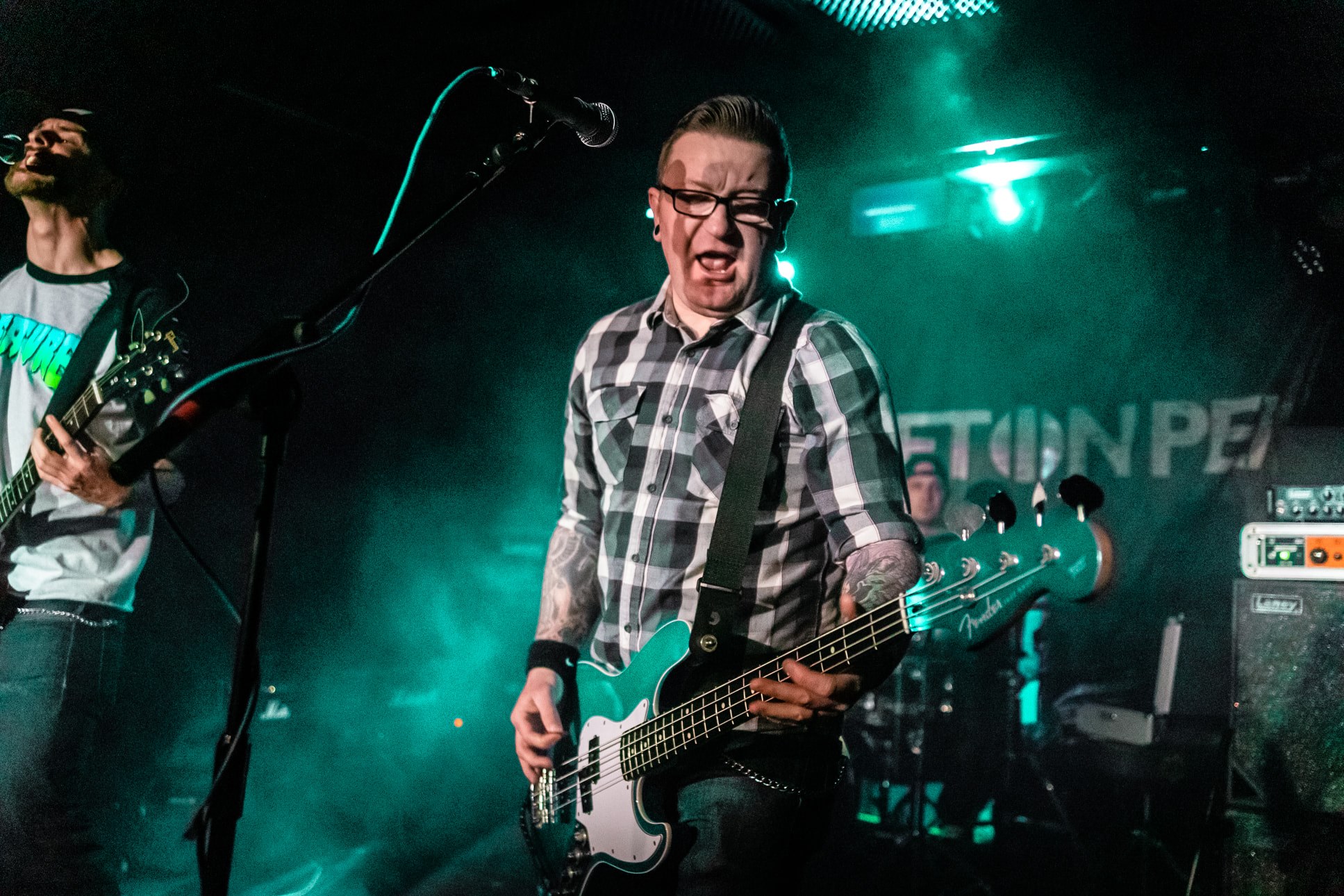 We recently caught up with bassist Mark Whittaker of Leeds punk rockers Woke Up Dead to talk about the band, playing at Rebellion Festival and the best place to store plectrums…

Hey Mark! How the hell are you, sir?

I’m good thanks. Just back from a spot of time travelling back to 80’s to play some classic arcade games… A bit of Outrun, Bubble Bobble etc. Oh and some bizarre Japanese pig sex simulator. Thanks for inviting me to do this interview!

Sounds incredible! For those who haven’t heard Woke Up Dead yet, could you start by telling us a little bit about your sound/influences etc?

Ah, a nice easy one to break me in. With Woke Up Dead we wear our influences on our sleeves, we’re an old-skool pop punk band so I’ll say that our sound came from the likes of The Ramones, Screeching Weasel and The Lillingtons, although we play a little harder than those bands so we are probably a bit rougher around the edges. Also swear words. We are BIG fans of swear words.

You’ve only played a handful of shows as a band, but you’ve already shared the stage with some awesome bands. What has been the highlight so far?

Yes, we have been incredibly fortunate enough to have been asked to play with some amazing bands since we started out It’s very humbling and maybe it’s not a big deal to many people, but to be able to be on the same bill as bands you’ve listened to and admired for years is a nice thing. I couldn’t pinpoint any one gig as a highlight as they’ve all been brilliant but i do know that playing with Bad Cop/Bad Cop was a highlight for our Singer Pete as they are one of his favourite bands. Stacey Dee is a hero of his and I don’t think he’ll have a problem with me saying this. They were really good to us too and I learned the best place to store my picks is in a bra so I’m gonna get myself a nice push up at some point.

Your first major festival appearance is coming up this summer at Rebellion Festival. How excited are you about that one?

Beyond stoked! When we started out we made ourselves a goal to play Rebellion Festival one day. We didn’t expect to be invited to play it in our first year! For me it really is a dream come true. I mean, there are bands on that line up I could fanboy and gush about all day long. Descendents, Masked Intruder, Dwarves, Teenage Bottlerocket. To say I’m a little excited is an understatement!

Just below the headliners at Rebellion each year there’s usually a lot of the same bands – mainly the UK bands that have been on the scene for 30+ years. How important do you think it is for festivals such as that one to put more focus on “Introducing” stages to welcome in the next wave of bands?

I had this conversation with someone a few weeks ago so here is my take on it. The Older bands are great and they are the whole reason that scene exists and continues to thrive and influence the new bands, but they aren’t gonna be around forever, except maybe Charlie Harper. I know first hand that the organisers push the introducing stage hard each year as I’ve seen bands play that stage and be invited back the next year to play one of the larger stages. There isn’t a single day goes by where one of the organisers doesn’t post a video of a band appearing on the Introducing Stage to get people interested in going along to check them out. I’ve got a list of a few i want to see myself, I think it’s very important that all festivals who do that kind of thing to push new talent but ultimately it’s down to the public to go check it out. This goes for watching support bands at gigs too. Do it! You might just find your new favourite band.

You’re based in Leeds, home to loads of great punk and pop-punk bands. Who should we be checking out?

Oh man, you’ve got me on this one. It’s funny because when I was in my previous band we played with a lot of pop punk bands from Leeds and the surrounding areas so you’ll probably know the ones I’m talking about! With Woke Up Dead, because we are kind of on that fine line where we can play with both – I hate labels and to pigeonhole things but I’m gonna have to do it here – modern pop punk bands but also old-skool punk bands I’m gonna namecheck some bands that i’ve discovered over the last year. Theyre not all from Leeds either but hey check em out anyways. The Fuckin’ Glorious. Great band, bit old-skool and a top set of lads. If they ever decided to not do music they could always do their own comedy show instead. Deadbeat At Dawn. They’re a ska band. If you know me you know I’m not a massive fan of that genre, only when it’s done right and these boys do it right. In Evil Hour. I instantly fell in love with this band as soon as i heard them. If you’re a fan of AFI and keep wishing they’d go back to the Art of Drowning era then look no further! Teresa Banks. They’re not even from this country but hell they’re great. Got that old-skool skatepunk vibe going on and remind me a lot of No Trigger. These guy’s are also playing Rebellion. (See that’s what pushing the Introducing stage does!) Daves. Leeds based and a lovely set of lads. They remind me of a more Punk version of Pulled apart by horses. Eye to Eye and some band called Pray For Hayden, they ain’t too shabby either.

Hollywood calls, they’re making Woke Up Dead: The Movie and you’re in charge of casting. Who stars as the band?

Who would I cast in a movie about Woke Up Dead? This should be easy but it isn’t…  Pete would be Mr T. He’s already got the muscle and mohawk down. Si is Vin Diesel, he’s got the hair. I would be played by Jeremy Renner or that old dude from Up!

I’d just like to thank you once again for inviting me to do this interview. Thanks to everyone who’s checked us out or helped us out in any way over the last 18 month and all the bands we’ve been lucky to share a stage with. Support local music, check us out on Facebook and if you’re heading to Rebellion Festival hopefully see you there! Kick ass n chew bubblegum.